Get a rendition of "Scoff," recorded live in 1990 and featured on Sub Pop's 20th anniversary reissue of Bleach. 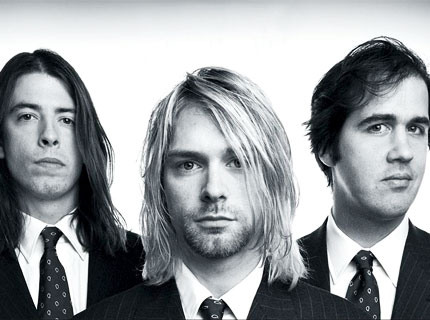 For Nirvana fans seeking a distraction from the war over Kurt Cobain’s Guitar Hero avatar, Seattle label Sub Pop has just the thing: An unreleased live version of “Scoff,” recorded Feb. 2, 1990, during a gig at Portland, OR’s Pine Street Theatre. Download the track below!

“Scoff” appears on 20th anniversary reissue of the trio’s debut album, Bleach, which arrives Nov. 3 on CD and 180 gram white vinyl, with a complete live recording of the 1990 gig with their original drummer, Chad Channing. Jack Endino, the original producer behind Bleach, re-mixed the original tapes of the live show for the special reissue.

“The release is a tribute to the vision of Kurt Cobain,” Nirvana bassist Krist Novoselic wrote on his Seattle Weekly blog. “Jack [Endino] and I got test pressings earlier this summer and the vinyl sounds killer. It’s going to be pressed on white vinyl — just like the first issue. I put the tone arm down and the bass growl of “Blew” is there in all its Grunge glory.”

“Considering it only took about 30 hours in the studio, and the equipment we used, I’m glad it sounds as good as it does,” Endino told Novoselic.

Actually, “Scoff” sounds great: Cobain’s guttural vocals and chugging guitar hit hard and with a clarity many other live recordings lack, no doubt a testament to Endino’s studio wizardry — but, more importantly, Nirvana’s ability as a live band. Download “Scoff” below.

See exclusive Kurt Cobain photos from the pages of SPIN.