How’s this for a great concept: The words of legendary Beat poet Jack Kerouac set to song by a pining indie-pop prince and an alt-Americana forefather. And when Ben Gibbard (Death Cab For Cutie, The Postal Service) and Jay Farrar (Son Volt, Uncle Tupelo) came together at Los Angeles’ El Rey Theatre on Friday night, their performance felt about as organic as the text that inspired it.

On record, Gibbard and Farrar tag-team a spare set of country-tinged folk songs; in person, those songs became considerably beefier.

Backed by Death Cab bassist Nick Harmer, Son Volt multi-instrumentalist Mark Spencer, and Superchunk drummer Jon Wurster, the duo in front made a strange but effective engine: lively Gibbard forever bouncing to his internal metronome, and lachrymose Farrar leaning deep into an invisible wall. But despite the latter’s joke about being in the newest band in America (this was their second show), the chemistry was there, and the playing tight. 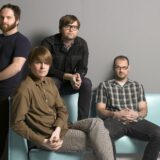 They opened with “California Zephyr,” a breezy Gibbard-sung appetizer to Farrar’s weightier “Low Life Kingdom.” Gibbard sat in on keys for the pedal steel-drenched dirge, then bounded back up to the microphone for “City And Sur (Willamine)” while his partner laid down shimmering electric guitar.

The show continued like this-taut and slack, each taking his turn, hardly a word of banter between them-for most of the night.

Each of the album’s 12 songs was enlivened by a rhythm section that knew when to back off and, surprisingly, when to get loose. “The Void” skirted a quiet psychedelia à la Beck’s Sea Change, while “Breathe Our Iodine” exploded into a genuine blues jam. They revived a semi-wonky Gibbard original-his 2004 open letter to Kerouac, “Couches In Alleys”-alongside a Farrar oldie. But more poignant were the encore-ending covers of Bob Dylan’s “Absolutely Sweet Marie” and Tom Waits’ “Old Shoes (And Picture Postcards).”

Still, the strongest moment came when the band left the stage to Farrar and Spencer, who by acoustic guitar, harmonica, and pedal steel built “Final Horrors” into a black wall of grunge Americana style.

Big Sur documents Kerouac’s hard-fought run at sobriety and, with due respect to Gibbard, both the music and subject matter are best matched to Farrar’s molasses drawl. The Death Cab singer was a gracious and necessary foil to all that grit, but this was Farrar’s night, and the crowd seemed to take note.

“Where is all the beauty coming from?” sang Gibbard early in the set. By the look of all of the gaping jaws aimed at the lone Son Volt boys half a dozen songs later, the answer seemed clear enough.

Ben Gibbard, death cab for cutie, jay farrar, son volt, We Were There