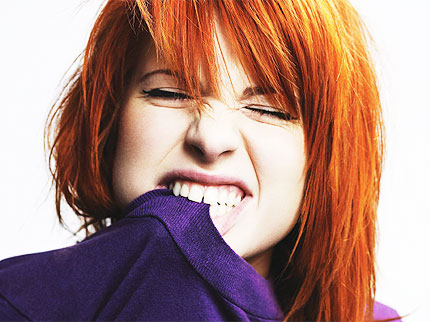 Last year, after a few canceled concerts, word swirled that Paramore, the Tennessee pop-punk band fronted by the colorful 20-year-old Hayley Williams, would not survive to see their third album.

Yet September 29 brought the release of brand new eyes. Considering that their 2008 single “Decode” sold more than 800,000 copies by virtue of appearing on the Twilight soundtrack and that they spent their summer as an opening act on No Doubt’s reunion tour, rumors of Paramore’s death seem not just exaggerated, but hard to fathom.

Williams spoke to us from Sacramento, California, where she was on tour with her band, which totally still exists.

What color is your hair today?
My hair is pretty bright. It’s a little more orange than usual.

I take it red is your favorite color?
I’ve always loved it. I found these pictures in my dad’s house when I was 13, and it was just this little baby in baby-blue overalls with bright orange hair. I was, like, “Who is this kid?” My dad was like, “That’s you.” I freaked out over it. Ever since then, I’ve enjoyed dyeing my hair red.

So your natural color isn’t red?
It was at some point, but now it’s actually a really light brown or blonde. It’s kind of gross-looking.

Have you ever considered pulling a Britney Spears and shaving your head?
That would be a riot. Dude, I would love to shave my head and just stick it to everyone!

Your image would undoubtedly take a hit, though.
Yeah, I think kids would have a field day with that. People really feed off bands’ images. When we started, I despised wearing makeup. I didn’t even want to put ChapStick on for photo shoots.

Is it true that you have a tattoo on your ankle that says “Shave Me”?
I do. It’s on the inside of my right ankle. On the Warped Tour a few years ago, if I wore shorts or if I wore my pants rolled up, someone by the end of the day would have written “Shave me” on my ankle. So I was like, “I’m going to have to get that tattooed so you guys won’t have to do it anymore.”

Has your tour with No Doubt earned you any older fans?
Yeah, totally. But we saw a lot of that after we did the Twilight soundtrack. You would think that would only appeal to 12-year-olds, but we started noticing a lot of older women at our shows. It’s nuts!

Older women do seem to have a thing for vampires.
Yeah. What is that? It’s creepy! It’s like a cougar fantasy of some kind.

You recorded a solo track for the Jennifer’s Body soundtrack. How did that come about?

It’s just something I did for fun. It actually got picked for the soundtrack a long time ago. Since that was right in the middle of the strain and tension that our band was going through, I was, like, there’s no way. Somehow the movie wasn’t finished yet a year and a half later, and they came back to me about it, and our band was in a completely different situation, feeling great, with a new record to show for it. So I was, like, why not?

So you were concerned that doing a solo song would fuel the rumors about Paramore possibly breaking up?
Of course. The last thing we want is to be putting out a record and have our fans think that one of us has a different focus. I have no intention of making some solo song that I did on a soundtrack my priority. Still, I feel really good about it, because this is one thing that I completed by myself and that someone got ahold of and enjoyed.

What would have to happen for you to go solo?
Oh my gosh. All the guys would have to be kidnapped and there would be a ransom note that would say: “Hayley, make a solo album or your friends die.” Our focus is on Paramore, and that’s where our loyalty lies. We’re all going to have different opportunities come up, and we’ll probably take them. At the same time, I don’t think any of us would ever do anything that completely screws up what we’ve got going on.

I read on your Twitter recently that you had a dream about Robert Smith. What was it about?
This is so weird that we’re talking about this; I feel like it’s dÃ©jÃ  vu. I can’t fully remember the Robert Smith dream, but just last night I dreamed I was in a school cafeteria and something really bad happened to Morrissey. He was brought in on a stretcher and then rolled through the room to some kind of hospital. And I just started crying uncontrollably. Then I woke up. It was awful.

Crazy.
Dude, it was so terrible. I didn’t feel like I wanted to tell anyone online about it because I didn’t want it to be like I had secret thoughts of something terrible happening to Morrissey, because I love Morrissey!

Do you often dream about other rock stars?
Especially on this tour, I have been having some outlandish dreams. Maybe it’s because of No Doubt, but we’re entering into a whole new world of celebrity.

Who have you met?
I met P. Diddy. Or Diddy. I like to call him Puffy because, let’s be honest, that’s who he is. He actually came to the Vegas show to see us. I was really impressed. But you want to know the coolest celebrity encounter I’ve had in my whole life?

All right. So I went on tour with my boyfriend [Chad Gilbert of New Found Glory]. We were somewhere in Indiana, staying on his bus, but it was in the parking lot of a Days Inn. And someone’s like, “Dude, Pauly Shore is coming to the parking lot.”

Wow.
Yeah. The dude said, “We met these chicks from Hooters, and they know Pauly Shore, and they’re bringing him to the parking lot, and we’re going to hang out with him.” Me and my boyfriend were watching True Blood on the bus, and I’m wearing a blanket, right? Pauly Shore shows up, and I walk outside in my blanket and walk up to him and say, “Hey, it’s so nice to meet you,” and he doesn’t say anything except, “Oh, you look snuggly.” And I freaked out on him because he sounded just like all of his characters. He’ll never remember it, but it was a life-changing moment for me.

You grew up in a religious family. What kind of music did your parents listen to?
A lot of Boston. And my mom was a huge Adam and the Ants fan. My granddad listened to a lot of Motown and Elvis and Johnny Cash. So I was kind of well-rounded.

So no Christian music?
Yeah. There was definitely some of that. My mom remarried, and my stepdad was a super Southern Baptist nazi, I guess you’d call it. So I definitely got a good bit of, you know, DC Talk.

DC Talk?
DC Talk is a Christian rap group. And what’s crazy about it is — oh, you are so awful!

Excuse me?
Dude, there is, like, a water-balloon war about to start outside this tour bus. Just letting you know that I might be screaming and running in a few minutes. Anyway, what’s weird is we actually know some of those DC Talk dudes now because we all live in Franklin, Tennessee, which is like the mecca of Christian music.

So what’s on Jesus’ iPod?
Dude, I don’t think he needs an iPod. He’s Jesus!