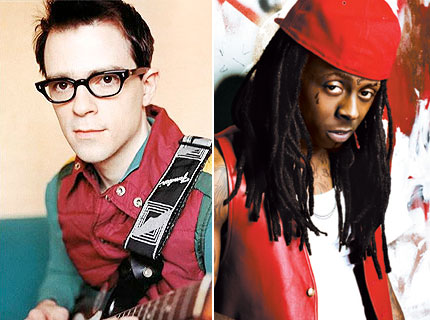 At first glance, the letters “W-E-E-Z” are the only thing Weezer and Lil Wayne, a.k.a. Weezy F. Baby, have in common. But dig a little deeper and you’ll find at least one other common interest: Partying, something Wayne excels at and Rivers Cuomo and Co. are celebrating on “Can’t Stop Partying,” a track off their new album, Raditude (out Oct. 27). And we all know what parties do — bring people together! Yep: Cuomo recruited Wayne to rhyme on the track!

“Weezer is always trying something new,” Cuomo told MTV News. “So I reached out to some friends of mine in different genres: Jermaine Dupri, for example, king of R&B, I wrote a song with him called ‘Can’t Stop Partying.’ It was a real challenge for me, taking his ideas, which are very slick, R&B party [ideas], and giving it some kind of edge, some darkness, making it work with rock, making it work with Weezer.”

“Not only that, but we got Lil Wayne to come in and do a rap on it,” Cuomo added. “Any other rapper would’ve just done, ‘Yay, we’re partying! Let’s drink and have fun,’ but he gave it the edge I was looking for. You can hear in his voice, it sounds so dark, like he was gonna get shot or something when he walks out of the studio.”

But Dupri and Wayne aren’t the only ones contributing to Weezer’s upcoming release. Cuomo also recruited All-American Rejects’ Tyson Ritter and Nick Wheeler, songwriter/producer Butch Walker, and super-producer Dr. Luke — and his newfound revolving-door approach to songwriting may pay off. Raditude’s first single, the pop-rock jam “If You’re Wondering If I Want You To (I Want You To),” is a vast improvement from the band’s past few releases.

So you know what that means: This Halloween, throw a raging party — we know Weezer have some experience downing cold ones, and they certainly have a stockpile of excellent costumes to choose from!