Bill Berry, who vacated his drum throne in 1997, jams onstage with Peter Buck and Mike Mills in an Athens, Georgia, nightclub! 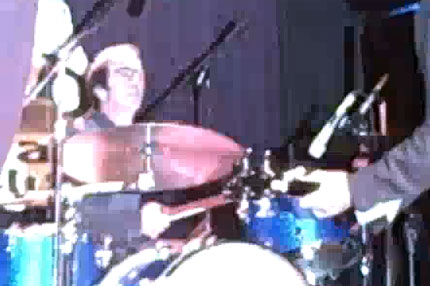 It wasn’t exactly R.E.M., but it was close. Drummer Bill Berry, retired since 1997, performed with R.E.M. bandmates Peter Buck and Mike Mills onstage Monday night at Athens, Georgia, nightclub the 40 Watt, covering the Beatles “Ballad of John & Yoko” and the McCoys’ classic “Hang On Sloopy.” The occasion was a Minus 5 show, during which Mills also sat in with the band (Buck is a regular member).

Berry, who last played with his old buddies in 2007 when R.E.M. was inducted into the Rock and Roll Hall of Fame, kept the beat while frequent R.E.M. collaborator and Minus 5 main man Scott McCaughey took lead vocals. Buck played bass with his back to the audience, almost as if to protect Berry from the crowd — and to keep in time with his longtime sticksman. Mills sang backing vocals and grooved along on tambourine.

The show came as part of the Minus 5’s current tour, for which the group — which also includes Steve Wynn and Linda Pitmon — plays as three different bands through the course of one night, the others being the Baseball Project and Steve Wynn IV. The tour concludes Thursday night (Oct. 1) at Austin, Texas’ Continental Club.

WATCH: Minus 5 feat. Bill Berry and Mike Mills “The Ballad of John and Yoko” & “Hang On Sloopy”