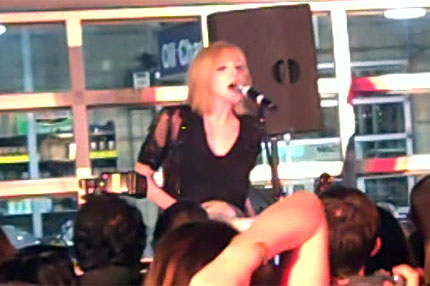 The party — hosted by designer Alexander Wang as part of NYC’s Fashion Week, and held outside Milk Studios’ gas station in Manhattan’s Meatpacking District — drew a who’s who of the rock and fashion worlds, from Jane’s Addiction singer Perry Farrell to Kirsten Dunst, Josh Hartnett, and model Bar Refaeli. Love and Larkin opened the show, performing a six-song set of tunes old and new, including “Malibu” and “Unsatisfied,” a Replacements cover, before Santigold’s short headlining set.

Love, of course, took a few jabs at fans between drags of her smoke (don’t worry, all the fuel was drained from the station’s tanks): “To the guy in the back waiting for 50 Cent to come on, he’s not coming, asshole” [via Style.com] Afterwards, she flocked to Twitter, adding: “We had way fun tonight for Alexander (Wang) sorry we mangled ‘Unsatisfied’westerberg but they were so fashiionista they didnt know dick.” Okay, that might need some translation.

Love, who recently revived Hole to release their first album in more than a decade, says the upcoming release, Nobody’s Daughter, will sound similar to David Bowie’s Diamond Dogs. The album is expected out in late 2009 or early 2010.