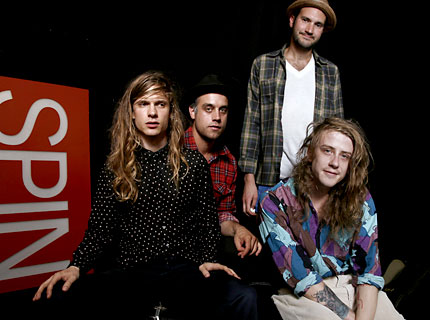 If you’d like to know why we touted Girls as the “band responsible for the year’s most captivating, if not outright best, debut album” in our October issue, look no further than these three videos, filmed when the band dropped by our NYC office for a stripped down, three-song set before the first date on their U.S. summer tour opening for Los Campesinos!

The band — Owens, bassist/studio collaborator Chet JR White, guitarist John Anderson, and drummer Garret Godard — also played two tracks excluded from the album: “Substance” and “Oh Boy,” both equally as melodic and honest as “Lust for Life.” “You can figure out what it’s about,” Owens said before beginning “Substance,” an ode to things consumed to “help you rock’n’roll.”

Check out the videos and post your comments below. And to read about Owens’ phenomenal journey, including a childhood spent inside a cult and a friendship with a millionaire oil scion, pick up the October issue of SPIN, on newsstands now.