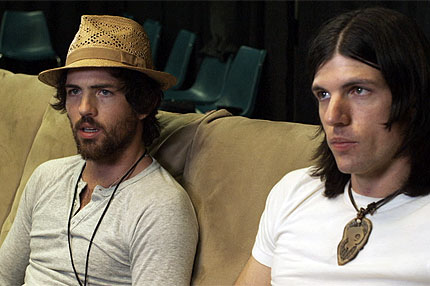 Recently SPIN declared the Avett Brothers a “Breaking Out” artist after hearing the southern trio’s modern revitalization of traditional folk and bluegrass sounds.Their banjo beat caught the ear of Rick Rubin, as well; the producer extraordinaire helmed their major-label debut, and we’ve got an appetite-whetting preview video for one of the new songs. Watch below!

The exclusive 90-second “January Wedding” clip shows brothers Seth and Scott Avett and bassist Bob Crawford discussing their eight-year journey as a band and their desire to stay close to their country-folk roots as their profile rises.In live clips of them performing “January Wedding,” the traditional instrumentation emphasizes their loyalty to the back-porch aesthetic.This is the sound of a band doing what they know best.

“‘January Wedding’ is pretty straight-forward…as far as staying true to the banjo, the acoustic guitar, the stand-up bass and the sensitivity of those things,” Scott says in the clip.”It’s a song that’s not really relying on anything but its most primitive make-up.”

Watch the video below.I and Love and You is out September 29 via American Recordings.