U2 Dazzle the Senses at Chicago Tour Opener

The Irish quartet toned down the politics, amped up the spectacle, and rolled out the hits at Soldier Field. 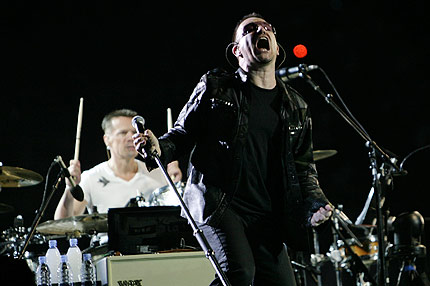 If U2’s latest, No Line On the Horizon, didn’t get people talking, the band seemed on a mission to make damn sure their U2 360° Tour — which debuted Stateside in Chicago Saturday night (Sept. 12) after romping through Europe all summer — did just that.

Of course, how could it fail with its centerpiece: an enormous claw-like structure pierced with a towering, glowing spire hulking over a rotating stage and 360-degree screen. It’s precisely the kind of thing that leaves concertgoers staring slack-jawed and primed for the sensory overload the world’s biggest band is required to provide.

And even if they’re not actually the world’s biggest band anymore — Coldplay appears to have lapped the Irish quartet, in terms of record sales — and even though the Claw has come under fire for its massive carbon footprint, with the 120 semis needed to haul the stage from town to town creating enough emissions to fly U2 to Mars and back, as one report suggested, the thing just looks so cool.

As the pillars of the music industry collapse, there’s something comforting in the spectacle concert. With the economy still struggling, it takes guts (and/or paralyzing delusions) to say “Screw it, let’s load up 120 semis and hit the road.”

The rapturous audience greeting U2 on the first night of its North American tour clearly didn’t have carbon footprints on their minds. From the moment the band stepped onstage for No Line’s “Breathe” to when “Moment of Surrender” closed the night, U2 were greeted as conquering heroes.

The 23-song set began with four songs from No Line and kept its focus there; U2 played seven of the album’s 11 tracks. It also stayed mostly in the new millennium, with four songs from All That You Can’t Leave Behind (crowd favorites “Beautiful Day” — which sounded amazing — and “Elevation” among them), and two from How to Dismantle An Atomic Bomb (including “Vertigo,” which U2 often played twice at shows during that tour).

Usual suspects filled in the remaining holes: “I Still Haven’t Found What I’m Looking For,” “One,” “Pride (In The Name Of Love),” “With Or Without You,” and “Sunday Bloody Sunday,” which U2 re-contextualized — via green lighting and images — from an anthem about Ireland’s Troubles to the green revolution in Iran.

It wouldn’t be a U2 concert without some references to the struggles of others. Aside from a moving tribute to Burmese leader Aung San Suu Kyi during “Walk On” — punctuated by a few dozen concertgoers taking the stage’s outer ring holding masks of Kyi’s face — and a video of Desmond Tutu thanking people for money raised for medication in Africa, U2 kept the focus on the music. In doing so, they also kept the crowd on their side. With so many people in this country struggling, now isn’t the time to beat them over the head with pleas for people in foreign lands.

Now is the time for a gigantic claw, a stunning light show, and loud rock music. Even a frontman with pronounced messianic streak like Bono knows sometimes you just need to go all out. In that sense, U2’s timing is impeccable.

U2 set list:
Breathe
No Line On The Horizon
Get On Your Boots
Magnificent
Beautiful Day
Elevation
I Still Haven’t Found What I’m Looking For
Stuck In A Moment (You Can’t Get Out Of)
Unknown Caller
Unforgettable Fire
City of Blinding Lights
Vertigo
I’ll Go Crazy If I Don’t Go Crazy Tonight (Remix)
Sunday Bloody Sunday
Pride (In The Name of Love)
MLK
Walk On
Where The Streets Have No Name
One
Bad

Encore:
Ultra Violet
With Or Without You
Moment Of Surrender

Kyle Ryan
Tags: u2, We Were There