Courtney Translated, Kid Sister, and the Streets' Mike Skinner make our list of musician Twitterers you should follow! 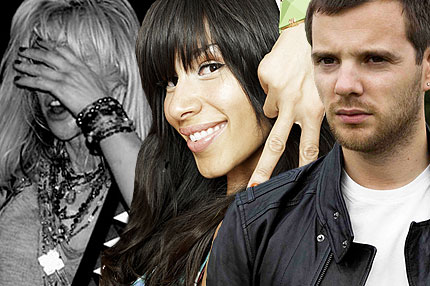 Why You Should Follow: Mike Skinner — better known as British rapper The Streets — made waves in April for using Twitter to release three new songs from his upcoming (and final) album, Computers and Blues. Since then, he’s released 10 more songs on the site and become one of Twitter’s most interesting and candid contributors. He tweets about sex products, the pros and cons of drinking beer with breakfast, and U2 songs he hears on the radio. Always witty, always charming, he’s earned a dedicated group of Twitter followers.
Best Tweet of the Week: “that sausage sandwich will give me the power to write the greatest song ever written. thus it will pay for my heart surgery in cash”

Why You Should Follow: Kanye West’s quick-rhyming protégé is releasing her debut album, Ultraviolet, on Oct. 6 — so get to know her now before she hits it big! The Chicago-bred rapper loves tweeting almost as much as she loves late summer barbecues and hanging out with her boyfriend, fellow Twitter addict DJ A-Trak. Expect hourly updates full of sunshine and positivity, whether she’s sipping margaritas poolside, working out at a “nightclubby” gym with a bunch of bicep-kissing men, fighting the urge to eat an entire medium pizza by herself, or getting her eyebrows waxed.
Best Tweet of the Week: “rooms in this hotel let so much light in feels like I’m at the beach!!!! sitting in an office chair at a desk with sunglasses on, hahahaa!”

Why You Should Follow: Hole singer Courtney Love’s kooky, incoherent tweets have already put her on our Follow Friday radar, but that doesn’t mean we understand what she’s saying. Luckily, there’s Courtney Translated, a Twitter page devoted to making sense of Love’s ramblings. The identity-concealed Courtney Translated usually manages to tweet within minutes after Love herself does, so if you follow both, you’ll never get too confused when Love starts slamming her hands on the keyboard and going into long, muddled, misspelled tangents about the Veronicas and Perez Hilton and assorted crook lawyers. Bonus points: Sometimes Love and @CLtranslated exchange tweets –which is just as hilarious as you can imagine!
Best Tweet of the Week: After Courtney posted a several-tweet-long rant about how everyone secretly wishes they were best friends with Jack White (even Trent Reznor!) and how she loves him more than her grandfather’s DNA (or something like that), Courtney Translated summed it up like this: “sometimes my imaginary friend jack white & i play hopscotch on the playground. trent reznor wishes he could see jack, but only i can see him.”