In advance of their 2010 album release, the reunited alt-rock quartet map a 24-stop outing. See all dates here! 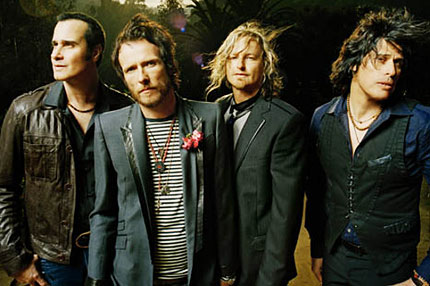 Just days after Scott Weiland suffered a midair seizure, forcing his plane to make an emergency landing in Dallas, the alt-rock singer’s Stone Temple Pilots have announced a 24-date outing, set to kick off October 2 in Mobile, Alabama. See all dates below.

The tour comes as the Los Angeles band is wrapping recording efforts for a new album, set to be released in early 2010. The album is being produced by Don Was and is the band’s first since they reunited in 2008 at Harry Houdini’s Hollywood Mansion.

The new songs were born out of jam sessions recorded during sound checks on the band’s 2008 reunion tour. The boys used the live recordings as a blueprint when they hit the studio this past spring.

“We brought a little Protools rig that was at the front of the house. So any little nuggets that popped out, we have on tape,” Weiland told SPIN.

The past few years have been busy for Weiland. After being ousted from Velvet Revolver, the singer not only rejoined with his STP band mates, but also worked with producer Steve Albini on “Happy” in Galoshes, his first solo album in more than a decade. The record’s key tracks “Paralysis” and “Crash” were a bit of a sonic departure for the alt-rocker. Also, Weiland, hit the road with a new backing band, launched a clothing line, and is now preparing for another big year with STP.

Even with all that on his plate, Weiland isn’t ruling out a reunion with Velvet Revolver. “Slash and I always got on pretty well,” he told SPIN. “So who knows?”