The former Doobie Brother explains his love for the Brooklyn hipsters. 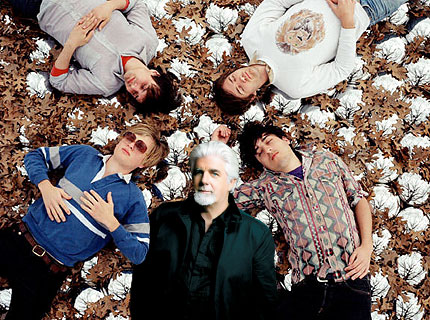 If you think about it, yacht-rock legend Michael McDonald and the eminently mellow Grizzly Bear aren’t really that far apart musically. Still, the news that the former Doobie Brother was asked by the Brooklyn critical darlings to lay down an alternate lead vocal track for their single “While You Wait for the Others” had a few folks scratching their heads. The 57-year-old “Yah Mo B There” growler sat down with SPIN.com to explain:

How did you and Grizzly Bear hook up?
A mutual friend set us up. I was up in New York and went to see them play the Beacon Theater and they just knocked me out. So somewhere shortly after that, and after talking to [bassist] Chris [Taylor], he mentioned this track he thought I’d be good for to sing in the background. He sent me a file and, as is the case these days, I did it at home in Nashville, at a friend’s studio. When I sent it back they asked if I’d just sing the lead one time for kicks and I said sure, why not. I didn’t really know why they wanted me to do it, the song sounded great as it was.

Were you worried your styles wouldn’t gel?
I think my real concern was not to do something that would pull too far away from what I thought was their style. And of course, now I’m wishing I had sung it a few more times. I didn’t really think they were going to use it, I thought it was just a joke.

Why did you think it was a joke?
I just thought maybe they wanted to hear me sing it and then that was as far as it might go. But it’s wonderful. For me to be associated with a group like this, I could pick up a bunch of momentum.

Grizzly Bear are great, but, honestly, is there really anything smoother than Warren G and Jadakiss sampling “I Keep Forgettin'”?
Probably not. Probably not.