The Queen of All Media throws a party with his favorite acts, including Ida Maria and Ladyhawke. And it is fabulous, dahling!!! 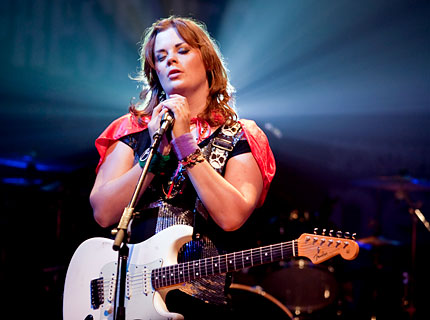 Perez Hilton helped put Lady Gaga and Mika on the map by featuring them in the “Listen to This” section of his popular site Perezhilton.com. So it was only a matter of time before America’s celebrity blog princess became a de facto A&R man with his own label and a national tour.

See a photo gallery of the show here.

Thursday night at Atlanta’s 1200-seat Variety Playhouse, said tour kicked offmuch like his fans would expect: The stage was flanked by shiny magenta curtains and a massive “Perez Hilton Presents” backdrop. A video screen played boppy tunes by the Ting Tings and Rihanna, until the house lights dimmed and the host bounded on stage, sporting perfectly messy hair and a tight-fitting turquoise tee that read “I’m Huge on Twitter.”

“Hi Atlanta! I hope you guys are drunk,” Hilton said by way of greeting. “And if not, it’s time to get drunk!” Then suddenly recognizing how young the audience was, he added, “And I don’t care how old you are, I approve of underage drinking…as long as you don’t drive.”

With that, the party was underway.

Led by androgynous frontman Justin Tranter, the group looked and sounded like the Sex Pistols — if they had emerged from Andy Warhol’s downtown Manhattan Factory scene. “We are Semi Precious Weapons. You should start fucking now,” Tranter urged. As for their set? It was like a drag show on speed, with just the right amount of pop fabulousness.

During the changover, Hilton hung in the crowd, smiling and chatting as flash bulbs popped around him, a constant reminder of the magnitude of his self-made celebrity. Then he was back on stage to pump the next act. “I have a silly celebrity website, but music is my passion,” he declared, before unleashing Norwegian pop-punker Ida Maria, a rising star in her own right.

Within seconds, Maria and her band — think Courtney Love fronting the Artic Monkeys — had the crowd bouncing like excited Muppets, pogoing along to supercatchy tunes like “I Like You So Much Better When You’re Naked.” But they also knew how to shut the hell up during stunning, delicate tunes like “Stella.”

Before introducing the final act, the sexy, synth-happy Ladyhawke, Hilton said, “Thank you guys so much for coming out. It’s the first time I’ve done this. Thank you.”Then back into the crowd he went.

Perhaps it was all the PBR swilling or the fact that Ladyhawke could have been playing the soundtrack to a feel-good 80’s-era John Hughes movie, but the atmosphere became less like a concert and more like a giant house party, complete with famous bands and your new BFF, that nice, surprisingly earnest Mr. Hilton.

Jonathan Baker
Tags: ida maria, perez hilton, We Were There