The Seattle alt-rockers rediscover their mojo, top charts for first time in 13 years with new album! 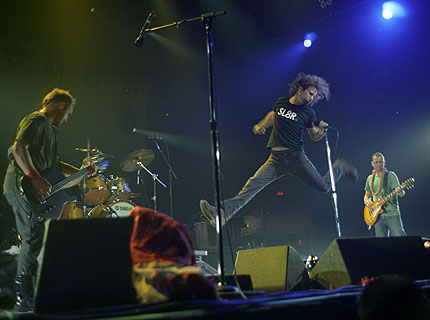 Pearl Jam’s spark is back! The revitalized alt-rock sound of the SPIN cover boys’ latest album, Backspacer, has secured the Seattle band the No. 1 position on the Billboard Top 200 Chart, with 189,000 album copies sold in the first week of release!

The triumph is the quintet’s first chart-topper since 1996’s No Code, and career fourth. Their last studio album, 2006’s self-titled effort, debuted and peaked at No. 2, Billboard reports. Elsewhere on the charts, Jay-Z’s Blueprint 3 slid to the No. 2 spot, while Brand New’s Daisy debuted at No. 6 with 46,000 copies sold, delivering the band’s first top 20 release. SPIN’s September cover boys Muse hold the No. 10 spot with The Resistance.

Check out ALL of SPIN.com’s Pearl Jam coverage!

Pearl Jam’s ascent to No. 1 started this past summer with a succession of excellent live performances, which included spot-on renditions of Backspacer tracks like “The Fixer” and “Get Some.” EdVed and crew opened their North American tour with a bang in Toronto, headed south for a pair of awesome sets in Chicago, wowed a massive crowd at San Francisco’s Outside Lands fest, and slayed the home team with a set of classics and rarities — and debuted a four-piece string section!

Pearl Jam continue their U.S. tour this weekend in Los Angeles. From there, they hit Austin City Limits, San Diego, and cap with a Halloween gig in Philadelphia.