Hometown heroes Vedder and Co. offer up plenty of goosebump moments -- and weigh in on Kanye. 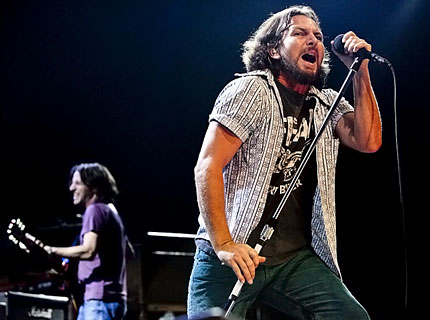 When you’re Pearl Jam, Key Arena is your living room and your family is 17,000 screaming Seattleites.

Monday night the hometown heroes opened the latest stop on their world tour with a sold-out, two-hour set that was simultaneously casual and thrilling, heavy on collective singalongs, goosebump moments, and, to the crowd’s elation, several first-time events: The core quartet was joined by a four-piece string section — including drummer Matt Cameron’s wife on viola — to debut a pair of tunes from the just-released Backspacer, and later a four-piece horn section for a cover of the Who’s “The Real Me.”

Said frontman Eddie Vedder, gazing into the Key Arena crowd for the first time since PJ’s 2003 performance at the same venue, “It’s a special night for us. We’re trying to get this rocket ship off the ground. I see some friends and I think I see some neighbors.”

Of course — he lives on the waterfront in West Seattle, a 15-minute drive from the arena’s back door. And though Vedder claimed, in light of Backspacer’s generally positive vibe, that the band wasn’t gonna get political, he had to agree with President Obama on one pertinent issue: “We too think Kanye West is a jackass.”

Stage production was low-key, comprising minimalist lighting, a typewritten Pearl Jam logo draped behind the band, and, next to Vedder’s mic stand, a few bottles of red wine that he drank from throughout the night. “Long Road,” a lost cut from Neil Young’s PJ-backed Mirror Ball, opened the show, but it was the second number, “Corduroy,” that fully revved both the crowd and the band. Guitarist Mike McCready hopped like a cheerleader while guitarist Stone Gossard was stoic and Jeff Ament swung his checkerboard bass. By the middle of the song all three were clustered headbanging around Cameron’s drum kit.

From there old and new mixed seamlessly. “Amongst the Waves” nodded to the grandiosity of the later “Given to Fly,” “Evenflow” shared a vocal cadence with “The Fixer,” and “Gonna See My Friend” bristled with the punkish energy of “Worldwide Suicide.” Live, it’s easy to understand why both the band and fans have immediately embraced Backspacer as an essential entry in Pearl Jam’s catalog, which stretches back almost 20 years — the songs hold their own.

The band left the stage after an hour and a quarter. They returned to encore with the string quartet, and the resulting acoustic numbers, “Just Breath” and “The End,” were plaintive, delicate and beautiful, Vedder’s vocals heartbreaking.

On most nights, the encore highlight would’ve been the horn-led “The Real Me,” a triumphant wall of noise that the song’s writer, the Who’s Pete Townsend, could be proud of. But there are few rock ‘n’ roll moments more ecstatic than the concert-closing “Alive” with the house lights on and the crowd drowning out the singer, putting a perfect capper to a Pearl Jam concert in Seattle.

Set List:
Long Road
Corduroy
Gonna See My Friend
Got Some
Hail Hail
Amongst the Waves
Daughter
Even Flow
Johnny Guitar
Unknown Thought
Worldwide Suicide
Elderly Woman
Off He Goes
Down
Save You
The Fixer
Life Wasted

First Encore:
Just Breathe
The End
Inside Job
Rearviewmirror
Given to Fly
Do the Evolution
Betterman
The Real Me (The Who cover)

Jonathan Zwickel
Tags: Eddie Vedder, pearl jam, We Were There