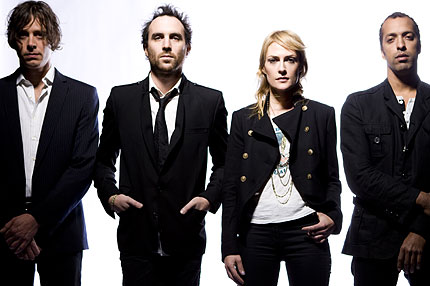 If there’s one band SPIN.com never seems to grow tired of it’s Metric. The Canuck indie-pop quartet’s latest record, Fantasies, is tastier than a plate of Poutine, and now the band has skedded the second leg of their U.S. tour, beginning November 16 in Buffalo, NY. See the full itinerary below.

If Metric’s maiden voyage behind Fantasies is any indication, the new 14-date fall/winter jaunt shouldn’t be missed. At their tour kick-off in Seattle last June, frontwoman Emily Haines and Co. worked the audience into a frenzy. “Haines strutted and spun across the stage wearing a tight, gold-sequined dress, as heads swiveled like a sprinkler, tracking her across the stage,” SPIN’s Erika Hobart wrote of the show.

Last winter, just before the Toronto natives self-released their new album, Haines and guitarist Jimmy Shaw dropped into SPIN HQ to perform a pair of songs of the then upcoming release. Below, watch the duo play acoustic renditions of “Twilight Galaxy” and “Front Row.”

Then check out video of legendary VJ John Norris chatting with the duo about their upcoming release, its creation and sound, the band’s decision to release it without a record label, and Haines’ peculiar writing process: “I basically tricked myself into thinking that I was never going to write another song and that it didn’t matter,” Haines said. “And it totally worked.”