Like Tom Petty, but grungier. Dave Grohl & Co. craft their version of a classic rock hit with "Wheels." 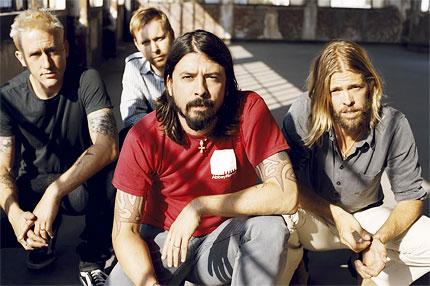 Remember that Greatest Hits package the Foo Fighters’ are releasing November 3 to hold fans over while Dave Grohl tours with his new supergroup, Them Crooked Vultures? Well, one of the two new tracks the boys recorded for the album just leaked — and it’s Grohl’s most blatant attempt at 1970s-era classic radio rock yet. We mean that in a good way.

Of course, there’s plenty of the normal Foo fare, too: big drums, Grohl’s throat-ripping vocals, and — ahem! — Guitar Hero riffs. But this time they’re glossed over with bright backing vocals, a rollicking, country-rock-esque rhythm, and, most glaringly, a lead vocal melody that sounds inspired by Tom Petty’s songbook. But, really, when did that ever do anyone a disservice?

It’s a catchy, tight, and agreeable pop-rock tune. Your mom will be surprised this was the guy who played in Nirvana. So has Grohl lost his edge? HELL NO!