The video game gives "Rape Me" a whole new meaning. Watch a new clip and see for yourself. 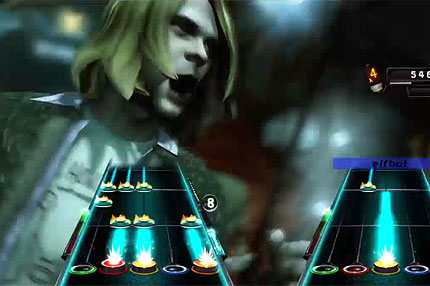 The new Guitar Hero 5 features Kurt Cobain as an unlockable character that can do many non-Kurtlike things. Watching the homemade YouTube video that’s sweeping the web today (available below) and seeing said avatar in full-bore action pouring his poor tortured soul into Bon Jovi’s “You Give Love a Bad Name” beside a bikini-clad bassist wearing angel wings (a reference to the In Utero cover?) and a mohawked skeleton playing drums (a reference, perhaps, to the fact that Cobain is SPINNING IN HIS GRAVE?) is …jarring.

No, that’s not quite the word we’re looking for.

Unnerving? Horrifying? An affront to all that is decent?

Maybe funnier is watching “Kurt” emote to Bush’s “Comedown” — that’s like a feature in The Beatles: Rock Band where the Fab Four might play the Turtles’ “Happy Together.”

Those who already consider Cobain a saint and estate-overseer Courtney Love (who signed off on this project) a heathen will find plenty of corroborating evidence in this five-minute clip. But even to casual observers with a passing understanding of Nirvana’s legacy, this will seem beyond the pale. No?

And for the rest of us, there’s the sad realization that a game that even a year or two ago was a surefire party-starter has turned just plain weird. All the trailer is missing is the image of Kurt in his tattered pixelated cardigan jumping over a giant shark.