Plus: Everything you need to know about this year's performers, presenters, and nominees! 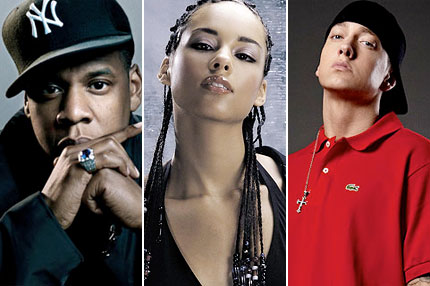 Didn’t get tickets to Jay-Z’s secret show Wednesday, or his 9/11 benefit tonight? Well Hova is giving you a third chance to see him in action this week, and this one — like the 9/11 show — will be broadcast into homes across the country. MTV has just announced that Jay-Z will perform at Sunday night’s Video Music Awards in New York City with Alicia Keys, debuting their Blueprint 3 duet “Empire State of Mind.”

Eminem has also joined the all-star line-up; he’s slated to put in a “special appearance.”After his buttcrack gag at the MTV Movie Awards in May, we can only hope he has something equally scandalous up his sleeve.Or maybe he’ll just hype his sub-par comeback album some more.

Both Jay and Em are up for awards — Jay for “D.O.A.” and Em for “We Made You” — and will join an already impressive list of performers, from Taylor Swift and Muse to Green Day and Pink.

Janet Jackson will open the show with a tribute to her late brother, followed by the premiere of the trailer for the upcoming Michael Jackson documentary, This Is It.Just as it did at the BET Awards in June, we expect the memory of the King of Pop to color the entire proceedings.

After all, Jackson pushed the music video from promotional throwaway to a cinematic art form. Clips like “Thriller” and “Billie Jean” gave a young MTV the boost it needed to reach the mainstream, and even though the network doesn’t play many videos these days, expect frequent tributes to the man whose moonwalking ways helped the Moonman gain his stride.

The presenters for the show are equally A-list, with appearances scheduled by Jennifer Lopez, Jack Black, 50 Cent, Jimmy Fallon, Pete Wentz, Gerard Butler, and many more.For the second year in a row, raunchy British comedian Russell Brand will host.

Check out the nominees here and start making your picks!The VMAs air this Sunday at 9 P.M. on MTV.