The cast of the gut-busting TV show reenact their rock musical in Boston, but spend more time plugging their upcoming season and DVD. 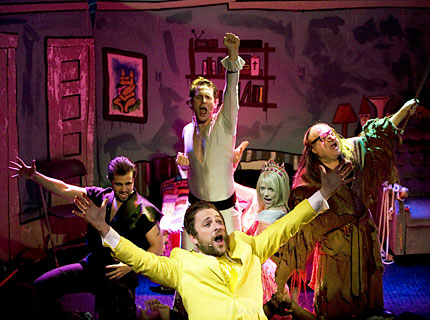 Christmas comes earlier and earlier each year it seems. Especially if there’s a super-duper stocking stuffer DVD to pimp.

The cast of hit FX series It’s Always Sunny in Philadelphia kicked off their six-city road show Tuesday night at Boston’s House of Blues with a teaser from the show’s upcoming Xmas release, A Very Sunny Christmas, which set the tone for the entire night: The show was much less an artistic endeavor than an unabashed promo for all things Sunny.

The Christmas clip was packed with the kind of stinging skits the show has now honed to a sublimely ridiculous point. Set in a South Philly bar, operated by the Gang — brother and sister Sweet Dee (Kaitlin Olson) and Dennis (Glenn Howerton), their friends Mac (Rob McElhenney) and Charlie (Charlie Day), and their father, Frank (Danny DeVito) — Sunny is Friends meets Cheers. That is, if the friends are always bickering and no one gives a fuck about your name.

Keeping in the promotional vein, the Boston crowd also got a preview of season five’s premiere, two days ahead of its TV debut, where our self-absorbed antiheroes resurrect a moronic drinking contest called Flipadelphia and Danny DeVito wears skinny jeans — hilariously hideous.

When they stopped hawking product, the cast re-enacted season four’s killer “The Nightman Cometh” episode, in which the lovelorn Charlie attempts to woo a disinterested waitress by writing a musical that’s misunderstood by his friends, becoming a travesty of incest and pedophilia. Apart from slight ad-libs, the performance remained faithful to the original — which meant no male nudity during the musical’s hilarious “Troll Toll” song, something hinted in the TV episode (and longed for by some adoring fans). And during a scene where Charlie admonishes DeVito’s character for chewing gum during rehearsals, DeVito’s chewed-up wad is spat out and hurled into the audience. Nasty.

It’s a weird phenomenon, paying to stand in a packed, sold-out venue to watch shows from basic cable — who watches TV standing? — and drinking expensive beer. Conversely, HBO recently hosted a free premiere for its fab new Jason Schwartzman vehicle,Bored to Death, in a less crowded bar nearby, and threw in pizza and brews too. True, Schwartzman was not in-house that night, and watching DeVito hurl gum at you in the flesh has its merits, but those HBO viewers really scored a better deal.

Linda Laban
Tags: its always sunny in philadelphia, We Were There