Activision claims Courtney Love knowingly signed a contract to license her husband's likeness and cashed their check. Love fires back. 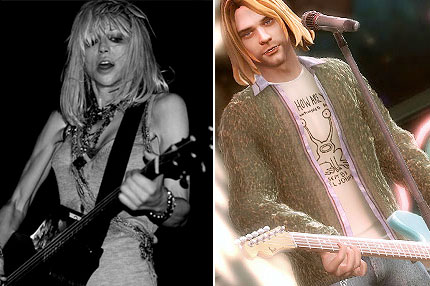 Nirvana fans ticked-off about Kurt Cobain’s unlockable avatar in Guitar Hero 5, which, frighteningly, allows the Nirvana deity to sing Bon Jovi and Bush songs, may have a target for their wrath. The game’s developer, Activision, says that Courtney Love, the handler of Cobain’s estate, knowingly signed a contract, understood all the fine print — and already deposited their check.

“There’s absolutely a contract and we know that the check has been cashed,” Guitar Hero CEO Dan Rosenweig told NME. “It’s really not Guitar Hero’s confusion. We went and spoke directly to the estate and made it crystal clear, got the rights, paid for the rights, and really we’ve done what we’ve always done.”

“I’m disappointed in this case that there seems to be confusion between the band and the estate,” he added, referencing a statement released by former Nirvana members Dave Grohl and Krist Novoselic, who expressed their discontent with Cobain’s unlockable avatar, and said their onetime bandmate “deserves better.”

In response to Rosenweig’s comments, Love unleashed a scathing diatribe via Twitter: “Call me and tell me what check and for how much. You liquidate Kurt and you tell me I’ve cashed a check? We didn’t get a cent,” she wrote. “Now Mr Activision if you want to fix that I’d very much appreciate it. You’ve humiliated me and my daughter. People think we did ‘Guitar Hero 5′ for money when in fact we got not one cent.”

It’s not the first time Love has maintained that she didn’t approve Cobain’s avatar: “FOR THE RECORD I DID NOT APPROVE KURTS AVATAR FOR GUYITARHERO5,” the Hole singer posted on Twitter Sept. 10. “[I] think Kurt would despise this game alone let alone this avatar.” Then, an hour later: “Disgusted? Welcome to my NIGHTMARE. [Y]eah we[‘]ll sue [A]ctivision this is disgusting.”

It’s a dirty, dirty stand-off. Who do you believe?