Madge's boyfriend and daughter join the dance party in this just-released clip that's free for 48 hours. Check it out here! 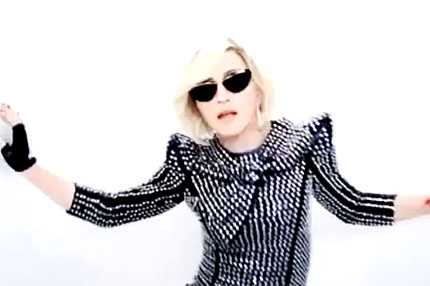 “Do you wanna dance?” Madonna asks at the beginning of her music video for “Celebration,” a new track featured on her upcoming greatest hits collection of the same name. For Madge, the answer is a big “YES!”

Over bangin’ club beats and trance atmospherics courtesy of Paul Oakenfold, Madonna, 51, tears up the dance floor in a short, short dress, as her boyfriend, Brazilian model Jesus Luz, works the turntables. Madonna’s eldest daughter, Lourdes, 12, even drops in to join the party, too. Watch below.

“Celebration” was released Tuesday morning on iTunes as a free download — but the offer only lasts 48 hours; on Thursday it will go on sale. The video, the product of director Jonas Akerlund, the man behind Madonna’s “Ray of Light,” “Music,” and “Jump” clips, was filmed in Milan, Italy, during a break in her Sticky & Sweet Tour.