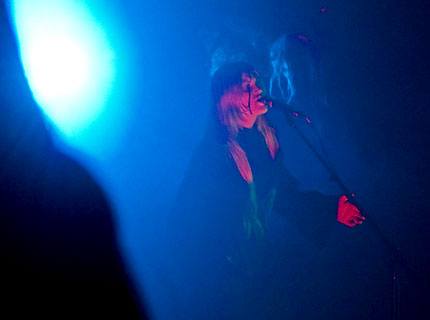 Imagine if Stevie Nicks was raised on the ice planet Hoth by shamans and given unlimited access to lasers, keyboards, tribal costumes, drum and smoke machines, and elongated percussion instruments with feathers attached. Meet Fever Ray, a Swedish outfit that made their U.S. debut at Webster Hall in New York City Monday night.

Fever Ray is the brainchild Karin Dreijer Andersson (a.k.a. half of Sweden’s brooding electro-pop duo Knife), who released her self-titled debut in 2009. On record Fever Ray is a solo project, but live, Andersson is backed by a four-piece band: two percussionists, a computer manipulator, and a guitarist/keyboardist.

The 70-minute show was conceptualized by Andersson and Andreas Nilsson, the Swede who masterminded the Knife’s concerts. Smoke machines filled the venue as blue spotlights and green lasers shot across the room, picking up pace with the first drones of electronic noise. 10 strategically placed lamps began pulsing with each hit of bass as Andersson walked onstage in a headdress that looked like a stump overturned on her head, or maybe a prop from the set of Where the Wild Things Are.

Andersson’s band played bone-chilling tunes off the Fever Ray album with note-perfect precision. “Seven” mesmerized with computerized-generated clicks and clacks, oscillating atmospherics, and Andersson’s frightening shrill. On “Concrete Walls,” a slower tune with deep bass and poly-rhythmic beats, Andersson sang about mothering her daughter in an indifferent world: “I live between concrete walls / When I took her up she was so warm… Oh how I try /? I leave the TV on and the radio.”

Later in the set, during Fever Ray’s most dance-friendly track “When I Grow Up,” Andersson ditched her headdress, showing long blond locks, causing hoots and hollers. With the singer’s face finally visible, the crowd, who once seemed a little confused about what, exactly, was going on, lit up the dance floor. It was a revealing moment for the guarded Andersson, who rarely shows herself.

Her disdain for the music press is well documented. In 2003, when the Knife won a Grammis — Sweden’s version of the Grammy — Andersson and her brother/Knife bandmate, Olof Dreijer, boycotted the ceremony to protest against male dominance in the music industry, sending reps to receive the award dressed as gorillas. The Knife seldom perform, but when they actually do, they wear Venetian masks, which they also sport in their promo photos. And although Fever Ray are embarking on a U.S. and European tour, the same type of image-control applies.

Many groups — religions, cults, Dungeon and Dragons players, Rush fans — keep to themselves, maintaining a certain level of secrecy. Fever Ray are one of these groups. And Monday night they held a sonic séance — led by an otherworldly mystic with a soul-stirring voice, who flapped the arms of her long black gown like a raven.

Fever Ray Setlist:
If I Had a Heart
Triangle Walks
Concrete Walls
Seven
I’n Not Done
Now’s The Only Time I Know
Keep The Streets Empty
Dry and Dusty
Stranger Than Kindness
When I Grow Up
Here Before
Coconut

William Goodman
Tags: fever ray, the knife, We Were There