Like the Knights of the Round Table in a dub trance -- but weirder! Hear "Pop Art Blue," a tune off the duo's upcoming release. 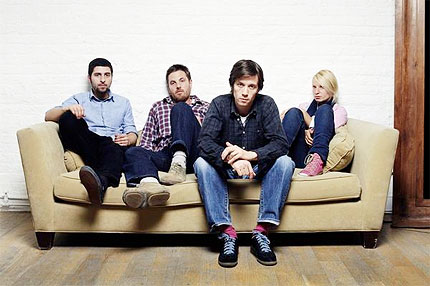 On new Zero 7 track “Pop Art Blue” — which you can hear exclusively below — Tilston’s singing lilts along, while Zero 7 accompanies her with brushed drums, plucked guitar, and muted horns. The tune’s sound reaches back before the last century of electric guitars and drum machines, which are so prevalent in their other work.

The song is from the group’s Yeah Ghost album, out September 29, and shows why this unassuming duo (Henry Binns and Sam Hardaker to their friends) has steadily built a loyal follow since releasing their Mercury Prize-nominated debut in 2001. They’ve been in the music business for more than a decade, having originally meet while working as recording engineers with Pet Shop Boys and Robert Plant.Before Zero 7 even released an album they were enlisted to provide remixes for Radiohead, Lenny Kravitz, and Lambchop.

The enchanting “Pop Art Blue” is equal parts 2009 and 1709, its sound like something the Parisian nobility might have jammed to. Check it out below.