This Brooklyn group fuse high and low brow on their fall release, Shut Up, Dude. 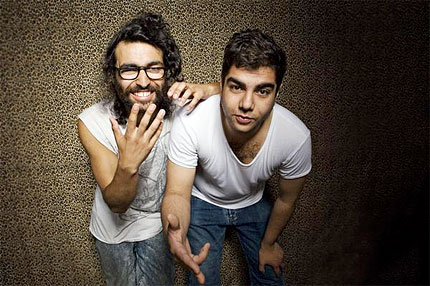 The duo fuse witty and intelligent insights with the downright ridiculous, shifting from lyrics about social and consumer culture to slapdash flows about booze, blunts, and babes. See: “Combination Pizza Hut and Taco Bell,” a hipster hit that’s either the most absurd or most clever rap song of the summer, which finds Himanshu Suri and Victor Vazquez repeating the title’s phrase over and over and over until you reach for the Advil or find some deeper meaning — which many are, interpreting the song as a veiled attack at corporate America.

While the song has made a name for Das Racist online, it’s tracks like “Ek Shaneesh” — also from their fall release, Shut Up, Dude — that deserve a little more attention (download the song below). The track fuses Bollywood sounds with computer-generated beats, and the boys spit rhymes like they’re freestyling during a social mixer for NYU’s art club, moving from “drinking beers, drinking beers, drinking beers for years” and smoking weed to Andy Warhol in seconds.

Download “Ek Shaneesh” below, then party down and study up for the arrival of Das Racist’s new album, out on a yet-to-be-announced date this fall.