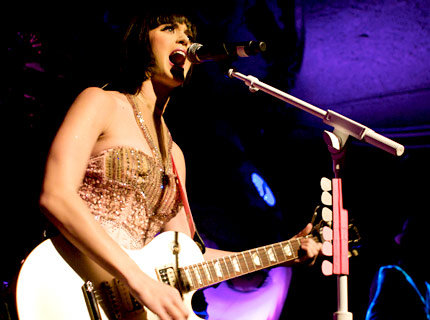 BEST HOME-SUBURB HEROES: MODEST MOUSE
Formed 16 years ago in Issaquah, a Seattle bedroom community, Modest Mouse regaled fans with a generous set spanning their entire career, from “Dramamine” (found on their debut album, This Is a Long Drive for Someone With Nothing to Think About) to “Satellite Skin” (from the new EP, No One’s First and You’re Next). Singer Isaac Brock may have been hampered by a set of broken ribs (“I did it to myself,” he lamented from the stage) but there was nothing restraining new guitarist Jim Fairchild (replacing former Smith Johnny Marr) and the double wallop of drummers Jeremiah Green and Joe Plummer.

BEST GIANT STRAWBERRIES: KATY PERRY
Katy Perry’s on-stage inflatables, including strawberries and a giant tube of cherry Chapstick, helped buoy a set that sagged as it went along. She also mentioned that she’s headed back to the studio: “I’m going to go in and do y’all right,” she promised. Then she turned in a limp reading of Queen’s “Don’t Stop Me Now.” Oh, well.

BEST GIRLS ON TOP MOMENT: IGLU & HARTLY
“Put the girls on top of your shoulders, fellas,” singer Jarvis Anderson suggested as he introduced the love song “Out There.” It was just one of many retro moves in Iglu & Hartly’s absurdly successful set, a mashup of old-school hip-hop and driving rock rhythms, played by appropriately long-haired musicians (guitarist Simon Katz is a dead ringer for Spinal Tap bassist Derek Smalls). Their manly camp reached a peak on “In This City,” once memorably described as “Tom Petty meets the Pointer Sisters in a neon karaoke bar.”

BEST SLOW DANCE: ALL-AMERICAN REJECTS
Tyson Ritter, bare-chested singer of pop-punk bigwigs All-American Rejects, grinded his hips with a lucky fan brought on-stage for “Mona Lisa.” It was a fitting climax for the sextet that clearly put the emphasis on “sex.”

BEST INDIE-TUDE: THE LONG WINTERS
John Roderick, the man fronting Seattle mainstays the Long Winters, good-naturedly scolded the “music-industry scumbags” in the band’s VIP section. He didn’t spare his own band either, noting that drummer Nabil Ayers was decamping to New York to pursue a career in the same infernal business. Happily, the indie cred of both is intact: Ayers co-founded local record chain Sonic Boom, while Roderick pals around with kindred spirits in Death Cab for Cutie and the recently-disbanded Harvey Danger.

BEST DISPLAY OF UNBRIDLED GLEE: MATT AND KIM
Brooklyn’s Matt and Kim seemed ecstatic to be playing at Bumbershoot, in the shadow of Seattle’s Space Needle. The keyboards/drums duo’s childlike enthusiasm (Kim climbed atop her kit at one point) extended to the youthful simplicity of their songs — to equally charming effect.

MORE OF THE BEST ON PAGE 2

BEST HEARD IN A CLUB: VIVIAN GIRLS
The Vivian Girls’ garage-pop got lost in the open air of Bumbershoot’s Broad Street Stage, as the Brooklyn trio’s reverb-drenched sound came off more like a mixing-board accident than an aesthetic decision.

BEST MANNERS: TELEKINESIS
Telekinesis mastermind Michael Lerner thanked the fans for cheering his band at the packed EMP/SFM Sky Church. When they responded in kind to the Telekinesis singer-drummer, he said, “You’re welcome.” Lerner may have been on his best behavior because his father had earlier introduced the band, whose debut “Telekinesis” was produced by Death Cab’s Chris Walla. Or he may just be a genuinely nice guy who can get “bummed” at missing Katy Perry and joke pleasantly about guitarist Chris Staples’ broken hip (“He fell down a well, trying to save a dog”). Fortunately, “mega-mega-trouper” Staples was able to play, albeit seated, as Telekinesis worked through their taut set, with Lerner pounding out his anxieties on his drum set.

BEST REINVENTION: SERA CAHOONE
Once upon a time, Sera Cahoone was the drummer and occasional singer in Seattle’s Carissa’s Wierd, the beloved, if spelling-challenged, indie rockers that contributed Mat Brooke and Ben Bridwell to Band of Horses. Now, the Colorado native’s a full-fledged alt-country singer-songwriter with a strong band and a nicely strong twang.

BEST DRESSED: RAPHAEL SAADIQ
A true old school soul, Raphael Saadiq complemented the musical elegance of his R&B revue, all slow jams and Smokey Robinson-styled melodies, by attiring his entire, including a female backup singer, band in dapper suits. Of course, that didn’t stop the smooth singer, once leader of Oakland’s soul-savoring Tony! Toni! Tone!, from eventually stripping down to allow everyone to admire his ripped physique.

BEST UNDER DURESS: THE DUCHESS AND THE DUKE
Last-minute replacements The Duchess and the Duke, with only one full-length album to their credit (on Sup Pop imprint Hardly Art), did everything they could to fill up their allotted hour. “That was the slowest we’ve ever played that song,” Kimberley Morrison said after their opening number, a typically enticing mix of ’60s folk, rock and country, graced by the harmonies of Morrison and fellow singer-guitarist Jesse Lortz, who added, “We’re going to play every song slow – twice.”

MORE OF THE BEST ON PAGE 3

BEST GEOGRAPHICALLY-CONFUSING BAND NAME
“We’re Point Juncture, WA,” announced the band’s keyboardist and trumpeter Victor Nash. “We’re from Portland, Oregon.” Sure enough, the quartet covered a lot of territory, and not just because they played a number of instruments. Their somewhat nerdy noise-rock benefited from the vocals of Amanda Spring (who also played drums and bass), which recalled Bjork circa the Sugarcubes.

BEST ROCK STAR ENERGY: BLACK EYED PEAS
The Black Eyed Peas expended so much energy in their first six songs that the power went out. After a brief interlude of BEP Unplugged (it doesn’t work in a stadium), they successfully rebooted their hit-making mix of hip-hop, reggae and electro. “The future is electro,” Will.i.am rapped, as the Peas pleased with favorites like “Boom Boom Pow” and the infamous “My Humps.”

BEST NEW WAVE REVIVAL: METRIC
It would be a stretch to say they could make the lame dance, but Metric could probably occasion some waving of crutches. The Toronto new-wavers bounced along with singer Emily Haines on “Dead Disco” and “Stadium Love.”

BEST SUBTERRANEANS: THE CAVE SINGERS
Seattle’s haunting Cave Singers reached plenty of low spots, in a good way,many of them on their driving, hellhound-on-my-trail blues.