Against Me! In Studio for ‘New Wave’ Follow-Up

Nirvana producer Butch Vig is back as the punks try to top 2007's Album of the Year. Click here for details. 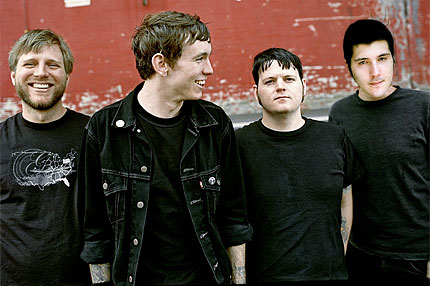 Florida punks Against Me! are hard at work on their follow-up to 2007’s career-making album New Wave — we named it our album of the year — with one familiar face in tow, and one brand new one.

Returning to the producer’s chair is Butch Vig, who handled production on New Wave and is best known for his work on classics by Nirvana, Green Day, and Smashing Pumpkins.”He gets our band and brings tons of great ideas to the table,” says frontman Tom Gabel.”The guy has got such a great track history, you can’t really fuck with that.”

The band also has a new drummer: George Rebelo, formerly of fellow Florida punks Hot Water Music. He replaces longtime drummer Warren Oakes, who left Against Me! in April to sell burritos — seriously!

The band is known for politically charged lyrics, but Gabel says this album is “all over the place” thematically.”If anything, I would say one recurring theme is reflection,” he explains. “‘White Crosses’ was written during my recent stay in St. Augustine, Florida, and ‘I Was a Teenage Anarchist,’ well, that’s pretty self-explanatory.”

“I feel like we are constantly pushing ourselves to better what we did on the previous record,” said Gabel. “New Wave was a great album to make, and now we want to show another side of the band. The new songs feel like a natural progression of where we should be at.”