The three superstars lead a torch-wielding mob in this clip for Hova's Blueprint 3 tune. 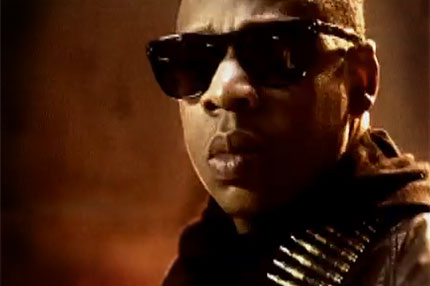 “Run This Town,” a bangin’ song off Jay-Z’s September 11 release Blueprint 3, may be a late contender for 2009’s defining summer jam, but Hova has more on his mind that just another notch on his diamond-studded belt. With help from Rihanna and Kanye West, the multi-platinum rapper leads a torch-wielding mob in his new video for the track, sporting a chain of bullets around his neck as he incites a revolution.

There’s political commentary at work here — witness the brief shot of Communist leader Mao Zedong two minutes in. But while the mob’s exact mission is unclear, one thing is certain: the bandana-clad vigilantes exude a Molotov cocktail-toting cool.

Jigga shot the video — which leaked this morning ahead of its scheduled premiere — at a civil war fortress near New York,giving it a gritty realism that surpasses most car- and-money-lovin’ rap videos. With Kanye and an Auto-Tuned Rihanna (hey, we thought Jay hated that overused hip-hop fad!) at his side, Hova is well prepared to run this town indeed.