Blink-182 guitarist Tom DeLonge compares his new project to Pink Floyd, Radiohead, and U2. Check out the trailer here! 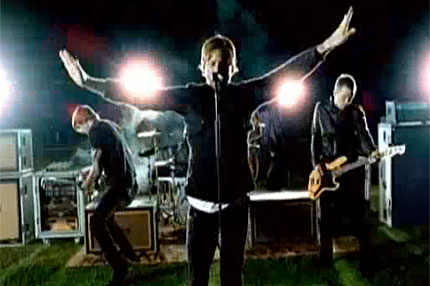 Tom DeLonge may be on tour with Blink-182, but that hasn’t stopped him from pursuing slightly loftier ambitions with his other band, the conceptual prog-rock outfit Angels & Airwaves.

On Valentine’s Day 2010, the band will release their third full-length album, Love, for free (yes, that’s right, free), along with an accompanying film of the same name.

The trailer is interspersed with brief, fleeting images from the film, which DeLonge told Billboard.com “blurs the line between full-fledged live action and documentary with these epic kind of meditative sequences where the sound design and the music and the picture all bend together to create a sonic experience as much as a visual one.”

In the interview, the rocker says Love is “like blending Radiohead and U2 together with these kind of Pink Floyd movements. It’s super conceptual and high-brow in many ways, very artistic, very Stanley Kubrick. But it’s not a rock opera. It’s a very modern version of what could happen when you blend the film industry and the music industry together in a very arty, kind of cool way.”