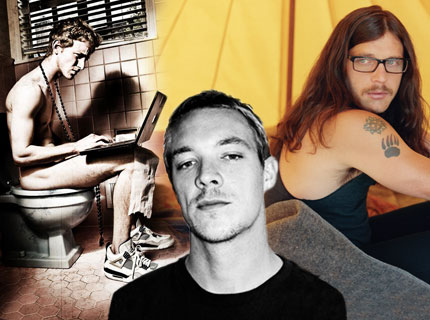 This week’s winners are all performing at this weekend’s Lollapalooza festival in Chicago. Check ‘em out:

Why You Should Follow: This sought-after DJ and producer (the beats behind M.I.A.’s popular single “Paper Planes”) is living the high life — drinking wine in Tokyo with Japanese reggae stars one night, riding a wild boar through Oahu, Hawaii the next. Luckily, he still finds time in between taking shots and surfing on acid to tweet about his incredible experiences, from encountering a lion in a hotel lobby to starting a night in Amsterdam and ending up in Ibiza. At Lollapalooza, he’s spinning at Playboy’s private Rockstar Brunch on Saturday morning and at Perry’s Stage on the festival grounds that night — so expect lots of tweeting, especially if there’s debauchery!

Best Tweet of the Week: “I’m @ a balinese opium den with with 5 dudes and about 50 topless girls. Its like hawaii circa 1899 in this bitch”

Why You Should Follow: Kings of Leon are one of the headlining acts at Lollapalooza, performing Friday night on the Budweiser Stage — and while all four of the Followills tweet, drummer Nathan is the one most likely to post throughout the festival. The self-described “lover, smoker, drinker, and thinker” treats his Twitter like a diary, summing up each day’s activities in 140 characters or less. Lately, since the band hasn’t been touring, most of his tweets have involved golf, beer, grilling, or some combination of the three — but while on the road (or playing a festival), this Followill makes for a very interesting follow.

Best Tweet of the Week: “Golfing in new jersey today. A very tough course to get on but i lied and told them i was a jonas brother. The beer shall flow like wine.”

Who: Asher Roth (@asherroth)
Why You Should Follow: Life for this hard-partying, college-loving MC is one big hangover — literally. His aptly named Great Hangover Tour, which also features fellow rap newcomer Kid Cudi, has been full of fun and mayhem (as well as brutal morning afters), and Roth has diligently tweeted through all of it. Of course, just like anyone, most of his tweets tend toward the mundane — documentations of what he eats, drinks, watches, listens to, and smokes — but his sense of humor is always on. Look out for Twitter reports from Lollapalooza as he takes the Citi Stage on Friday night!

Best Tweet of the Week: “I’m sorry I can’t go out with yall….its shark week”