Lily Allen, Wale, and Grizzly Bear's Ed Droste make our list of musician Twitterers you should be following this week! 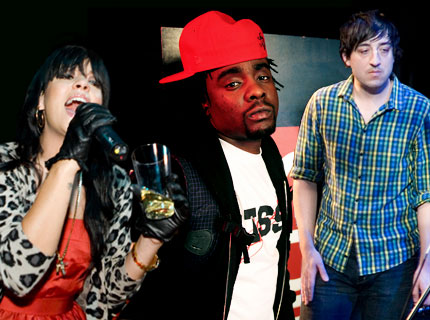 Who: Grizzly Bear’s Ed Droste (@EdwardDroste)
Why You Should Follow: Droste’s Twitter bio reads “I will do this until I inevitably say something I regret and erase the profile” — so follow him while you still can! The Grizzly Bear frontman posts frequent Twitpics (like this adorable one of him and bandmate Christopher Bear goofing off in a Japanese photo booth) and chronicles his adventures on the road, which include hanging out with Beyonce Knowles and watching Lady Gaga’s bass player snort cocaine. Who knew? Bonus points: He often breaks news about tour dates, opening acts, and TV appearances via Twitter!
Best Tweet of the Week: “Dan and I got festival-ed out and saw all the acts we wanted to (all amazing) and are unwinding to some tequila and ‘hotel for dogs’ — soothe,” after this year’s 3-day Summer Sonic Festival in Tokyo and Osaka, Japan.

Who: Lily Allen (@lilyroseallen)
Why You Should Follow: It isn’t easy being Lily Allen. Perez Hilton is forever drawing penises next to her mouth, her brand-new Breitling watch is too big for her, and she wasn’t nominated for a Mercury Prize. Thank goodness for Twitter. The pop tart has more than a million followers who are happy to listen to her complain! Of course, she also posts pictures of her stage outfits and late-night pig-out sessions, tweets commentary during cricket games, and gives backstage reports during concerts. Plus, you’ve got to love her Twitter wallpaper — a picture of Allen on an African safari!
Best Tweet of the Week: This shot of Allen looking like quite the rock star with her gold nails, giant rings, Ray-Ban sunglasses, and blinged-out Chanel headband.

Who: Wale (@Wale)
Why You Should Follow: This much-hyped D.C. rapper — who comes with Mark Ronson’s seal of approval — can’t get away from the UberTwitter app on his phone. He tweets constantly, even while filming a show for BET or desperately searching for a breakfast joint that offers turkey bacon. His humility and graciousness shines through in every tweet; he seems genuinely surprised and happy to be “semi-famous,” as he puts it, and thanks his fans almost daily for their support.
Best Tweet of the Week: “i wanna jump into a bed full of electric red girls…that is all..ok goodbye”