The unique songstress -- who has two tracks on the (500) Days of Summer soundtrack -- picks her most memorable love flicks. 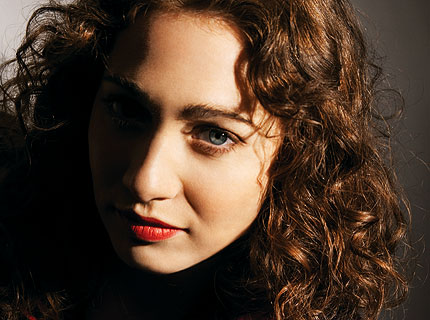 Regina Spektor says she loves Zooey Deschanel and Joseph Gordan-Levitt’s new movie, (500) Days of Summer — and not just because two of her songs, “Hero” and “Us,” appear on the indie flick’s soundtrack.

“It felt very unique, compared to a lot of romantic comedies,” Spektor, whose new album Far is out now, tells SPIN.com. “It wasn’t, you know, sugary. It stayed with me after I saw it — I felt like I kind of went through something with the characters.”

So what other romance movies have stuck with the 29-year-old through the years? We asked her to share some of her favorite movies about love — and she gave us her top five picks:

Woody Allen’s black-and-white ode to New York City — and the many follies of love — is a favorite of Spektor’s because of the characters. Of neurotic comedy writer Isaac Davis (Allen) and his two loves, 17-year-old high school student Tracy (Mariel Hemingway) and outspoken intellectual Mary (Diane Keaton), Spektor says, “They’re so real and so alive. They’re not bored, they’re not going through the motions. There are moments of real pain and sadness in that film.” The fact that the movie perfectly captures, in all its glory, the city where Spektor grew up — after moving there from Russia at age 7 — doesn’t hurt, either.

In this lively romantic comedy, set in Naples, Milan, and Rome, ’60s sex symbol Sophia Loren plays three different characters: Adelina, who sells black market cigarettes and has to keep getting pregnant to avoid a prison sentence; Anna, a rich, bored city girl who begins cheating on her husband with a struggling writer; and Mara, a high-class prostitute who catches the eye of a young seminary student. “It’s an amazing film,” Spektor says. “And it’s in color, wonderful color — it might even be Technicolor! I don’t know why, but whenever I see ‘Technicolor’ at the beginning of a movie, it makes me think of happiness.I think, ‘Ahhh, this is going to be nice and bright and sunny and fun!'”

This quirky, bawdy, fantastical film, directed by Federico Fellini, follows a wild crop of characters as they come of age in 1930s Fascist Italy. While there is no predominant love story — and the abstract plot can be difficult to wade through — Spektor says she enjoys it for the obvious romance between director and setting: “It’s almost as though the love in this movie is Fellini being in love with Italy.”

“It’s a really beautiful, bittersweet, very funny, but also, at times, very tragic love story,” Spektor says. The two-part Soviet film follows the lives of three girls — Katerina, Antonina, and Lyudmila — as they attend university together and then journey down different paths of life and love in Communist Russia. “I actually re-watched it all recently on YouTube,” says Spektor, who was born in Moscow. “I was in some hotel and I just could not sleep, so I typed ‘Russian films’ into YouTube and this movie came up and of course it was in, like, 13 parts, so I kept watching it in 9-minute chunks. At first I thought, ‘Oh, I’ll just watch a couple of scenes,’ but then I got sucked into it and suddenly it’s 5 in the morning and I’m clicking into the last scene!”

This classic romantic comedy — starring Billy Crystal and Meg Ryan — is one Spektor watched over and over again as a teenager, videotaping it every time it aired in the middle of the afternoon on WB-11. “I just always thought it was so witty and so sweet,” she says. “You don’t just follow the characters; you really get to know them. And I loved how they had those scenes with real couples talking about their relationships.”