Pete Wentz and Mark Hoppus are among the onlookers as Brendon Urie and Spencer Smith go unplugged -- and cover Journey! 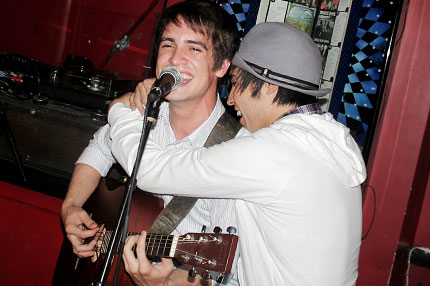 Last night, at an impromptu gig at a New York City bar, Panic! at the Disco frontman Brendon Urie had a simple message for fans worried about the band’s recent personnel shifts: “Don’t Stop Believin’!”

Joined by drummer Spencer Smith at East Village hangout Angels & Kings (which is co-owned by Fall Out Boy’s Pete Wentz), Urie played a short acoustic set that included a cover of Journey’s cheeseball mega-hit — plus Panic!’s just-released song “New Perspective,” and “I Write Sins Not Tragedies” from their breakthrough debut, A Fever You Can’t Sweat Out.

Wentz and Blink-182 bassist Mark Hoppus — both in town for their bands’ local stops — watched from the crowd. Wentz even attacked Urie with a big, bromantic hug while he performed.

The show was part of the bar’s AKoustic Mondays party that features a surprise band every week. The Scenic and Vinnie Caruana of I Am the Avalance also performed last night.

At the night’s end, Hoppus and Wentz stole a tiny bit of Panic!’s thunder, breaking the news that they’ll be wrapping their massive North American tour at New York City’s Madison Square Garden on October 4.

Of course, Hoppus and Wentz had a second to pose with Panic! for a quick snapshot (see above).