We remember the man who defined '80s uncool and had an uncanny knack for melding movies and music. 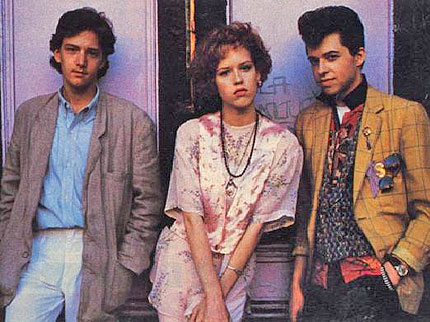 John Hughes only directed eight films in his career — and one of them was Curly Sue — yet he was more than a filmmaker. He was an adjective. He defined ’80s-vintage high-school misfitdom, and did so largely by nailing what high-school misfits listened to in the ’80s, when movies were otherwise largely soundtracked by faceless cutout-bin synth-rock. He passed today at age 59, and we remember seven indelible moments from his highly danceable filmography:

Simple Minds, “Don’t You Forget About Me”
(from The Breakfast Club)
Folks outside of Scotland might have never discovered Simple Minds had it not been for Judd Nelson’s iconic, film-closing fist pump — nor would many suburbanite dudes have started wearing their girlfriends’ earrings.

OMD, “If You Leave”
(from Pretty in Pink)
John Hughes wrote but didn’t direct Pretty in Pink — but we’d be hard-pressed not to include this uber-sappy slice of synth pop that caps the love story of Andie and Blane (and Duckie!). Yet another perfect selection for the closing moments and credits of a Hughes film.

Karla Devito, “We Are Not Alone”
(from The Breakfast Club)
Okay, his movies did have some faceless cutout-bin synth-rock, but this montage — as entertaining as it is dramatically unlikely — of our five mismatched Saturday-morning detainees turning a library staircase into the stuff of dance legend, is as memorable as any scene he ever filmed.

Wayne Newton, “Danke Schoen”
(from Ferris Bueller’s Day Off)
There isn’t anything in our collective cultural DNA to suggest that Wayne Newton is cool. But Matthew Broderick, somehow pulling off that leopard- vest thing, lip-synching on a parade float down Michigan Avenue on a goddamn school day became teendom’s swingiest fuck-you.

Spandau Ballet, “True”
(from Sixteen Candles)
Oh, the pain! Molly Ringwald’s Sam watched Jake Ryan sway the night away with another girl while these Brits cooed delicate huh-ha-ha-ha-haaaah-has. “This is the sound of my soul” — worked for both Sam and P.M. Dawn.