MAGAZINE EXCERPT: From the bombastic songs to the stadium crowds, everything about Muse is supermassive. Will their new album finally bring America to its knees? 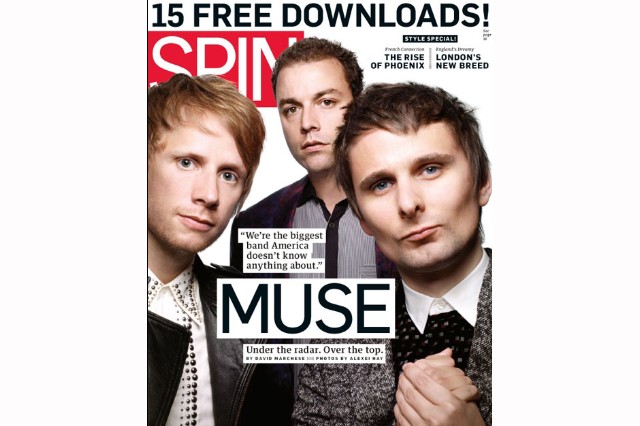 “We’re playing a place called Bruar Falls,” he says, arching his eyebrows above his thick glasses. “I’m pretty sure we’re headlining.” Bruar Falls is the size of a rich man’s bathroom.

Dominic looks up from his iPhone. “My band’s playing New York. Not till September, though.”

Apple Cheeks’ jaw goes slack. “Wh — what band are you in?”

If all goes according to plan, Yankee obliviousness toward Muse is about to change. In their native England, drummer Dominic Howard, 31, guitarist-singer Matt Bellamy, 31, and bassist Chris Wolstenholme, 30, have assumed the role of geeked-out rock Übermenschen. Proggier than Queen and heavier than Radiohead (a frequent, if irksome, comparison) and with a vocalist who graduated summa cum louder from the Jeff Buckley school of keening angels, the trio has a gift for dour prophecy and bombast (both on record and onstage) that has made them one of the U.K.’s most popular bands. In 2007, 140,000 punters crammed into two sold-out gigs at London’s Wembley Stadium. Equally immodest crowds witnessed headlining sets at the Glastonbury, Leeds, and Reading festivals. Eighty-five thousand tickets for a November tour of the U.K. disappeared in less than 30 minutes. Their last two studio efforts, 2003’s Absolution and 2006’s Black Holes & Revelations, have sold five million copies worldwide. And barring an act of God or Michael Jackson dying again, The Resistance, the band’s fifth album, will easily top the U.K. chart upon its release this month. (Critical adoration, however, typically pales comparatively.)

In America, though, largely due to an early transatlantic stumble, Muse are still catching up. Here, Absolution and Black Holes were certified gold, selling a combined 1.3 million copies, with the latter reaching No. 9 on the Billboard albums chart. In 2007, the band filled arenas on both coasts, selling out the Forum in L.A. and Madison Square Garden in New York City. The leap to American enormodomes continues September 24, when Muse open the first of nine dates on U2’s current tour, which, as Apple Cheeks now knows, includes Giants Stadium. (Or, as Howard innocently referred to it, “The place where the Yankees play.”)

The band from tiny Teignmouth in southwest England is threatening to break in America in a way that no British band has done since Coldplay. This is not an accident.

“I expect Muse to be a long-running arena act,” says Tom Whalley, chairman and CEO of Warner Bros., the band’s U.S. label. “I understand that it’s hard for a young act to do that nowadays, but they’ve already shown they have the potential, both in terms of album sales and concert success. So we’re going to do all we can to keep growing their career. We believe that this band can be as big as it wants to be.”

Which, explains Bellamy, is really, really big: “We’d like to be remembered amongst the best bands in the history of rock. It’s necessary to have sustained success in this country for that to happen. But we’ve got a lot of work to do. We’re perceived differently here.”

Or, as Howard puts it, “We’re the biggest band America doesn’t know anything about.”

A black town car is ferrying Matt Bellamy to a rendezvous with the dead. Introductions will not be necessary.

“When I was younger, my mother communicated with ghosts,” says Bellamy as the limo snakes its way to Manhattan’s South Street Seaport and the posed and dissected cadavers that constitute the “Bodies” exhibit. “She and my dad would invite friends over to use a Ouija board and talk with spirits. I was allowed to watch. I imagine my interest in the unknown started then.”

That curiosity about what lies beyond has never gone away, and it has taken a particularly sinister turn. “I’ve always been quite interested in conspiracy theory, and I still am,” says the slight Bellamy, dressed for the macabre occasion in a light-blue striped button-down shirt, black slacks, and black loafers, his brown hair styled in the irregular thatch favored by Brit rockers since 1965. “But I’ve learned to be careful in talking about this stuff. People take my curiosity as evidence of belief. I think as I get older, I’ll become more and more interested in pursuing verifiable lines of thinking rather than blurting out my opinions.”

On 9/11: “There is evidence that suggests the powers that be knew of the attacks beforehand and let them happen. There’s a video on YouTube called Loose Change that explains it.”

On the media: “Why do we see gruesome images of violence coming from Iran but not Iraq? Because certain people with power have a vested interest in regulating our access to information.”

On the creation of human life: “It’s plausible that the building blocks of life — RNA and DNA — arrived on Earth as debris from exploded planets. If we understand alien life to include things like cells and amoebas, then it’s fair to say that humans harbor both Earthly and alien origins.”

On his British rock contemporaries: “There’s a fetishization of the past. Rock is too young to say the Beatles or the Rolling Stones can’t be bettered. Purely in sonic terms, they absolutely can be. If the Beatles were around today, they’d be doing what we’re doing and working at the cutting edge of technology.”

He’s not done. “I’m not going to name names, but I look around and see a lot of hobbyists. We’ll go into the studio for months and tour for years. People are not living for it like we are. It’s not life and death for them.”

Urgency has never been an issue for Bellamy. Growing up in Teignmouth (population 15,000), playing in a band seemed the only possibility for a life that offered greater thrills than eating the magic mushrooms that grew in the moors surrounding the town.

“There’s not that much constructive to do there,” says the singer, whose plumber father George played guitar on the first song by a British band to reach No. 1 in the U.S. (“Telstar,” by the Tornados, in 1962). “I met Chris and Dom in school, and they felt the same way. When we were about 13, I wormed my way into Dom’s band. We got Chris to switch from drums to bass. Straightaway, we all had this belief in what we were doing.”

A steady series of gigs in friends’ basements, during which they mixed originals in with Sonic Youth and Primus covers, gave them the courage to enter a local battle of the bands. They called themselves Rocket Baby Dolls, teased their hair, slapped white pancake makeup on their faces, smashed their instruments, and won.

“We beat some serious musicians,” recalls Bellamy over the din of late-afternoon traffic. “People who played Pink Floyd covers and things like that. We thought we were going there to take the piss out of the competition. To end up winning made us think that we had something to offer as a band.”

Soon, they drew the attention of Dennis Smith, who ran Sawmills, a nearby studio where Oasis cut Definitely Maybe, and who would record the band’s debut EP in 1998.

“Even when they were kids, there was a focus to what they were doing that all great bands have,” says Smith, who also served as their first manager. “They were so single-minded, there was no Plan B. They didn’t go to college. The only thing they needed was time to develop.”

They would get it. But not by choice.