Welsh twee-poppers cause a pleasurable panic as they prepare to bid adieu to a bandmember. 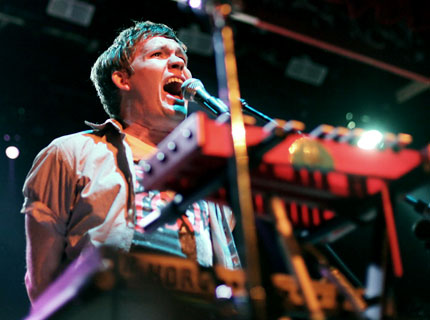 At more than a few points during Los Campesinos!’ tour-opening performance at New York City’s Webster Hall on Tuesday night, it seemed as though everyone’s lives were in serious, immediate danger.

As soon as the Welsh indie pop outfit launched into its first song, the synthesizer-and-glockenspiel-fueled “This is How You Spell,” the entire audience began to dance — causing the floor to flex so dramatically that it felt like it might break.

Or was it just paranoia? After all, Los Campesinos!’ music tends toward the neurotic. As infectious and danceable as it may be, there are dark undertones to nearly every song — moments of great insecurity, vulnerability, bitterness, and sadness. When frontman Gareth Campesinos! (not his real name) sang, “We are waiting here for catastrophe,” it didn’t matter how upbeat the keyboards sounded, it was hard not to share in some of his weariness.

That’s not to say, however, that Tuesday’s show was a downer. Los Campesinos!’ seven members, with their menagerie of instruments, have mastered the art of singing about failed relationships, broken hearts, and emotional breakdowns while still keeping things fun. With enough energy to power a thousand guitar amps, Gareth and the rest of the Campesinos! family played songs from their debut album, Hold On Now, Youngster, as well as two songs from an upcoming, as-of-yet unannounced release, all to pure bouncy pop perfection.

The combination of Gareth’s heavily-accented, verbose, and often theatrical sing-speak style and fellow vocalist Aleksandra Campesinos!’ sweet, lilting voice never sounded better — which may have been small consolation for the band. In June, she announced plans to leave Los Campesinos! at the end of the summer to finish pursuing her university studies, which were interrupted when she joined the band in 2006.

Violinist Harriet Campesinos! is well-positioned to take over as leading lady when Aleksandra departs; during one of the band’s last songs, she doubled on keyboard and vocals, while Aleksandra danced and sang off to the side.

One of the show’s shining moments was a rousing performance of the catchy single “Sweet Dreams, Sweet Cheeks,” which had Gareth and Aleksandra climbing offstage to sing atop one of the speakers, arms around each other’s shoulders, microphone wires tangled.

But some of the night’s more memorable songs were actually performed before Los Campesinos!’ set, when hippie punks Girls took the stage to air tracks from their upcoming redundantly-named album, Album, due September 22. Though much of the audience experienced some gender shock when the band ambled on stage (Girls are guys) — the San Franciscans quickly hushed some of the crowd’s noisiest, drunkest members with good-vibing-yet-grungy songs like “Hellhole Ratrace,” “Lust for Life,” and “Laura.”

Anna Hyclak
Tags: Los Campesinos!, We Were There

New Music: Los Campesinos! – “I Broke Up In Amarante”