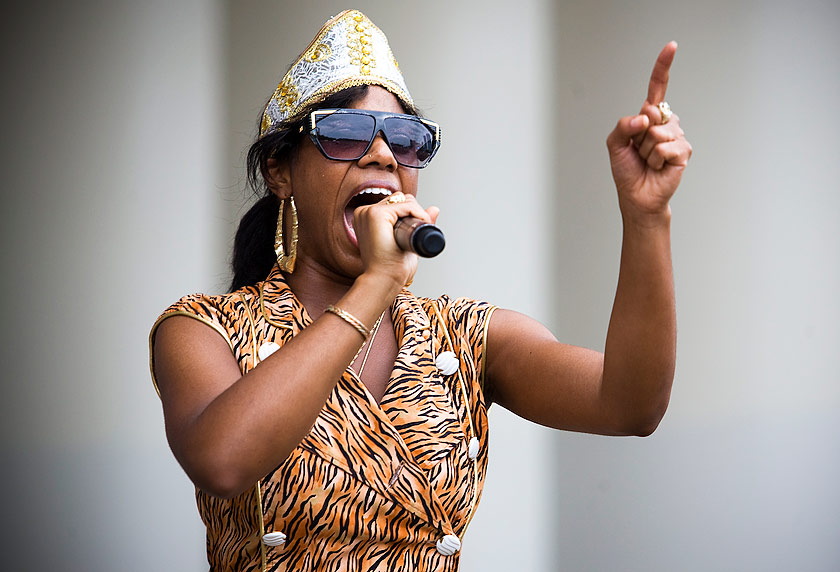 BEST SUPPORT GROUP FOR THE BROKEN-HEARTED: IDA MARIA
“Have you ever had an experience with a boyfriend who’s not really grown up?” asked the Norwegian songstress, decked out in a gold dress with matching gold Adidas high-tops at the Citi Stage on Saturday. “Well, this song’s about that love and heartbreak.” Running in circles, bending and flipping, and shouting until her throat went dry, the 25-year-old rocker charmed with “Forgive Me,” a poppy punk song about unrequited love, setting the tone for her set: reckless sorrow, delivered with a winking, boozy ‘tude. On her best song, “Drive Away My Heart,” she spat “love will be my grave,” fell to the stage and flopped about, then requested the audience get naked during the aptly titled “I Like You So Much Better When You’re Naked.” On her final song, she flashed the crowd, pulling guitar picks from her bra as she begged for love during a cover of Iggy and the Stooges’ “I Wanna Be Your Dog.” Desperation never looked so appealing. — WILLIAM GOODMAN

BEST HERO’S HOMECOMING: SANTIGOLD
You’d have thought Brooklyn’s Santigold was Bruce Springsteen from the crowd she drew for her triumphant, beat-intoxicated set — her first after finishing the European swing of her year-plus tour — at the Playstation Stage. Her ocean of adoring fans stretched nearly all the way to the Budweiser Stage, three or four football fields away. The most intrepid of them scaled whatever they could, including the platform behind the soundboard, to get a better look. Dressed regally in a gold crown and giant gold hoop earrings, the musically-omnivorous electro-punk responded in kind, leading the throng through chant-along versions of “Get It Up” and “Unstoppable,” titles that qualified both as truth-in-advertising and statements of purpose. — Bill Friskics-Warren

BEST RECOVERY FROM A SNOOP DOGG COVER: CHAIRLIFT
Paying homage to a fellow Lollapalooza performer, Brooklyn synth-poppers Chairlift opened their set with a cover of Snoop Dogg’s lascivious “Sensual Seduction.” Through no fault of the band’s, the performance was about as sexy as Grandma’s dentures. Simply put, the sound sucked. Synths cut in and out, and the mix was way off-kilter. The technical issues were never resolved, but kudos to Chairlift, because the trio delivered a solid performance anyway. Lead singer Caroline Polachek even seemed motivated by the problems, singing with a fire absent from the band’s somewhat bloodless album. Maybe these dudes should have technical mishaps more often. — DAVID MARCHESE

BEST STAGE BANTER: ATMOSPHEREI’m not generally a big fan of indie rap outfit Atmosphere, but I’d never seen them live until Lollapalooza, where rapper Slug’s impish charisma helped his everyman raps get over. I even got a kick out of his stage banter: “Make some noise you ugly Illinois bastards”; “You’re all really enjoying my music — you must be on something”; and “I’m feeling really comfortable on stage, I guess it was that banana I ate.” Wacky, yet oddly perfect. Oh, he also implored people in the audience to make out with strangers. Many complied. — D.M.

BEST UNDERAPPRECIATED BAND: CONSTANTINES
If veteran post-punkers the Constantines were ever going to break through to a bigger audience, they would have done it by now. Too bad, because more people deserve to have the Toronto quintet in their lives. During an early afternoon set on Saturday, every song was a marvel of tension and release, as Bryan Webb and Steve Lambke pulled taut, wiry lines from their guitars and then exploded them into sharp chordal riffs. Webb’s voice is also just about perfect for this kind of music: gritty but warm, and always full of emotion. The band’s uncompromising sound is not always easy to enjoy – they were relegated to a side stage after all — but neither are a lot of wonderful things. — D.M.

BEST STEADFAST DEDICATION: NO AGE
Lo-fi noise rock has its own superhero. “He’s like superman and for some reason decided to play the show!” No Age sticksman Dean Spunt, slack and smirking behind the drums in Ferris Bueller shades, said, pointing at guitarist Randy Randall, who was sitting, uncharacteristically, on a chair. Randall’s left arm — the one he uses to fret the guitar — is busted and in a sling, but he was ready to rock. The Sub Pop duo ripped through cuts like “Teen Creeps,” a charming racket of a song with ramshackle punk drums and unhinged guitars, which, somehow, all came across as a poppy blast of fun. Deerhunter’s Bradford Cox seemed to agree: He stood side-stage, slack-jawed and cheering the boys throughout their 40-minute set. — W.G.

READ MORE OF THE BEST FROM LOLLAPALOOZA ON PAGE 2 >>

BEST GUITAR SOLOS: BEN HARPER AND THE RELENTLESS7Ben Harper, playing here with his backing band Relentless7, has been one of the 2009’s hardest working musicians, seemingly popping up at every festival. I hadn’t seen him until Saturday night, though, and I wish I’d caught him sooner: His guitar playing was easily one of the day’s highlights. Whether adding blazing filigrees to covers of Led Zeppelin’s “Good Times, Bad Times” or Jimi Hendrix’s “Red House,” or kicking originals like “Shimmer and Shine” into higher gear, Harper told compelling stories with his solos. They had beginnings, middles, and ends. They were emotionally expressive and technically impressive. And they passed the most important six-string litmus test: people picked up their air guitars and played along. — D.M.

BEST REHEARSAL FOR AN INEVITABLE HEADLINING GIG: GLASVEGAS
Glasvegas will be headlining a festival sometime soon. The Scottish quartet’s massive sound seems as if it were created almost expressly for that purpose. On epically heartfelt songs like “Geraldine” and “Go Square Go,” singer and rhythm guitarist James Allan, clad like the rest of the band all in black, bellowed like a younger, hungrier Bono, while his cousin, guitarist Rab Allan, traded the Edge’s chime for a fierce distortion. At all times, the songs were catchy, but rocked. They were tough, but compassionate. They draw inspiration from iconic bands, but in a fresh way. And, if the wild cheering from the wobbly dudes standing on either side of me was any indication, Glasvegas sounded really good drunk. All of which are arguments for a place higher up on the bill. — D.M.

BEST ROCK HIGH PRIESTESS: KAREN O
Yeah Yeah Yeahs frontwoman Karen O took the Budweiser Stage dressed in a multihued Indian headdress and feathers, before deploying a series of ceremonial moves with the imperious command of a rock high priestess. Working her way through a 90-minute set that drew upon her band’s entire catalog, she used her voice to mesmerizing effect, whether going from a whisper to a scream in a single song or unleashing a flurry of incantatory ululations. She also spent much of the evening ecstatically hopping around on stage, as much like a shaman challenging an unseen spirit as a punk teenager spinning Raincoats and Slits 45s in her bedroom. The all-but-full moon over Lake Michigan smiled quietly in approval. — B. F-W.

BEST FUTURE WORLD RULERS: CARE BEARS ON FIRE
Call it kid-core if you must, but the spirit of ’77 is alive and well, Ramones-style, in the barely teenage Brooklyn punk-trio Care Bears On Fire. Bassist Jena, lead singer and guitarist Sophie, and drumming dynamo Izzy certainly didn’t seem to be, um, kidding around with the forcebeat-fueled originals they deployed during their frenetic late afternoon set. They also made nice work of Tears for Fear’s “Everybody Wants to Rule the World,” thrashing away at the new-wave chestnut as if the ambition expressed in its title was well within their reach. — B. F-W.

BEST MASKED MARVELS: MIIKE SNOW
Not to be outdone by the Bloody Beetroots, who sported their trademark Marvel Comics headgear during their DJ set on Friday, the Swedish electro-pop outfit Miike Snow hit the stage wearing plain white masks straight out of Japanese Noh Theater. Alternating between frothy synth ballads and swelling pop anthems, falsetto-voiced Andrew Wyatt and his phalanx of keyboardists and programmers spent much of their set shifting from instrument to instrument like the members of Animal Collective. The main difference was that, in contrast to their U.S. counterparts at times arid experimentalism, the Swedes kept things hooky and propulsive, thanks to tribal or on-the-one beats that, like those mixed by the hooded Beetroots, induced people to dance, dance, dance. — B. F-W.

READ THE WORST FROM LOLLAPALOOZA ON PAGE 2 >>

WORST USE OF CLARINET: LOW ANTHEM
The Low Anthem are a good band. Lollapalooza put them in a tough spot. The Rhode Island trio’s lovely folk-rock is a delicate, often hushed thing. Unfortunately, those are adjectives that don’t always translate well to a festival gig, where big gestures go over best. When the band broke out the clarinet and harmonica for some gentle mewling, it wasn’t a surprise to look around the audience and see a lot of people start checking their schedules. — D.M.

WORST WHITE STRIPES COMPARISON: BAND OF SKULLS
People often refer to the White Stripes when talking about Band of Skulls, likely because the British three-piece has a similar guy-chick blues-rock thing going on with vocal-swapping guitar player Russell Marsden and bassist Emma Richardson. If anything, though, the Skulls’ fat, fluid sound — scudding bass lines and fuzz-toned guitar predominate — makes them more of their generation’s answer to classic ’60s power trio Cream than Zep acolytes like the Stripes. For their late morning set on Lollapalooza’s BMI Stage, the Skulls reprised much of their current Baby Darling Doll Face Honey, including “I Know What I Am,” quite possibly the catchiest hit in the uncatchy annals of blooze-rock. — B. F-W.