Still nursing our sunburns, SPIN's Lolla team weighs in with a final roundup of the festival's highs and lows. 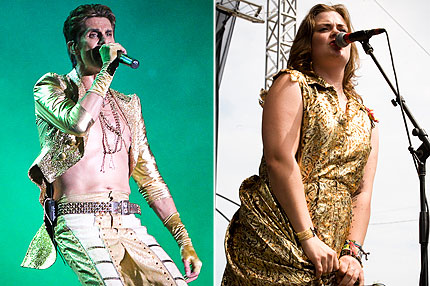 MARK BAUTZ — EDITOR, SPIN.COM
Best Set: Ida Maria, Saturday at the Citi Stage. The Norwegian punk-pop pixie acted as if she’d been raised in hell, braving the 97 degree heat in a bright golden dress and thrashing around on stage to Iggy Pop’s “I Wanna Be Your Dog.” She didn’t get naked, as her hit song implores, but she did unbutton her dress and pull guitar picks from her bra. Powerful, musical, addictive.
Best Discovery: Bat for Lashes, Sunday at the Vitaminwater Stage. Pakistani-born singer-songwriter Natasha Khan has been steadily building an audience over the past year. But the weekend’s discovery was that her haunting after-midnight dirges and subtle Bjork-ian beats would play so well during the bright Chicago glare of her 1:30 PM set time. She’s a pristine beauty who never let the overheated crowd see her sweat.
Biggest Disappointment: Competence isn’t usually a bad thing, but too many of this year’s Lolla sets featured decent bands playing just fine, thank you… but without urgency. It’s rock’n’roll, people! That’s why go-for-broke performances by funkster Black Joe Lewis and the Honeybears and Ida Maria stood out from the pack.
Bummed I Didn’t Catch: Jane’s Addiction’s festival closing show at the Budweiser Stage. Joe Perry guesting on “Jane Says”? So wrong it’s right.

DAVID MARCHESE — ASSOCIATE EDITOR, SPIN
Best Set: Jane’s Addiction, Sunday at the Budweiser stage. I was a bit nervous about what to expect from Jane’s — friends who’d seen the band on tour with Nine Inch Nails this summer said the performances were a bit ragged. But shortly after Dave Navarro eased into the set-opening “Up the Beach’s” high-arcing guitar lines, I was at ease. Live at Lollapalooza, the original line-up of Navarro, festival founder Perry Farrell, Eric Avery, and Stephen Perkins was a graceful beast, sexy and dangerous.
Best Discovery: Hey Champ, Friday at the Chicago 2016 stage. Standing in some dirt at noon on Friday, dancing was just about the last thing I wanted to be doing. Thankfully, local discoteers Hey Champ didn’t give a damn about me — the trio’s euphorically building synth lines and insistent beats had me, and a few thousand others, shaking things that don’t normally shake at that hour.
Biggest Disappointment: The sound at the Citi stage. It was problematic all weekend, leading to long waits before bands could play and muddy sound during the performances. Chairlift and Gang Gang Dance in particular were forced to deliver in spite of the sound.
Bummed I Didn’t Catch: The horse punch. And Bat for Lashes.
People Were Really Talking About: The heat. I’m not ashamed to say I sought refuge from the blistering sun in the dank shade provided by the inside of a portapotty. A bit disappointed in myself, but not ashamed.

WILLIAM GOODMAN — ASSOCIATE EDITOR, SPIN.COM
Best Set: Tool, Saturday at the Chicago 2016 Stage. Frontman MaynardJames Keenan is a gifted singer — but his three-piece band are Tool’sreal stars, and they proved it with a sinister-sounding 90-minute setthat exploded in your chest like a depth charge.
Best Discovery: Zap Mama, Friday at the Playstation Stage. Thisband’s fusion of jazz, funk, and Brazilian tropicalia brightened Lolla’s rainy first day, as did singer Marie Dauine, who wore a neon yellow dress withlipstick-red ruffles, gold pumps, and a 12-inch vinyl record attached to herhead.
Biggest Disappointment: Arctic Monkeys, Saturday at the BudweiserStage. Instead of charming my pants off with their sharp post-punk sounds as expected, the Brit foursome’s set was just mediocre, lacking thewhiz-bang many a journo has written about.
Bummed I Didn’t Catch: Santigold, Saturday at the Playstation Stage. Word has it the Brooklyn electro-punk’s gig was so excellent, and thusly crowded, that concertgoers scaled the soundboard for abetter look!
People Were Really Talking About: The helicopter flying above theBudweiser Stage before Jane’s Addiction’s headlining set. Would the band leap from the sky? Would guest guitarist Joe Perry descend with his axe in hand? Neither. Any stunts were scrapped due to the weather conditions. They don’t call it the Windy City for nothin’!

BILL FRISKICS-WARREN — CONTRIBUTOR, SPIN.COM
Best Set: Santigold, at the PlayStation stage. In a word — her word — unstoppable.
Best Discovery: Care Bears On Fire, Saturday at the Kidz stage. The future of rock, or punk anyway, and from a trio of tough grrrls barely in high school.
Biggest Disappointment: No Beastie Boys, although last minute fill-ins Yeah Yeah Yeahs, galvanized by a shamanic performance from the indomitable Karen O, were inspired replacements.
Bummed I Didn’t Catch: Mercury Prize nominees Bat for Lashes. (No one can be in two places at the same time.)
People Were Really Talking About: Kaiser Chiefs! Kaiser Chiefs! Kaiser Chiefs!