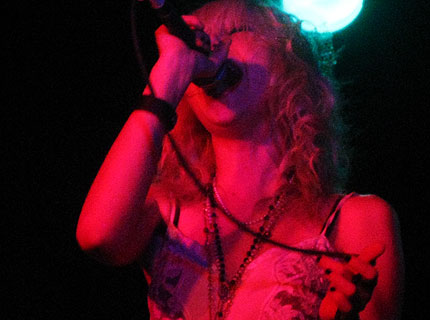 On Gossip Girl Taylor Momsen plays the daughter of a retired rock star, but in real life it’s the 16-year-old actress who’s wielding the axe. She recently debuted her band Pretty Reckless, and now she has posted the group’s first material to their MySpace page.

Momsen points to Joan Jett and Blondie’s Debbie Harry as musical influences. And though comparing herself to rock legends may inspire an incredulous snort from Gossip Girl naysayers, Momsen does Jett and Harry no dishonor by spitting fist-pumping choruses over raucous guitars played at a furious punk speed.

The pounding drums and jangling guitars of “Zombie” are reminiscent of Paramore; and the sticky-sweet kiss-off “He Loves You” finds her warning a friend about a dodgy dude. “I hate to be the one to tell you he’s a liar,” she sings.

“You’re hearing my diaries,” Momsen recently said about the songs. “Have fun!”