Karen O Debuts ‘Where the Wild Things Are’ Single 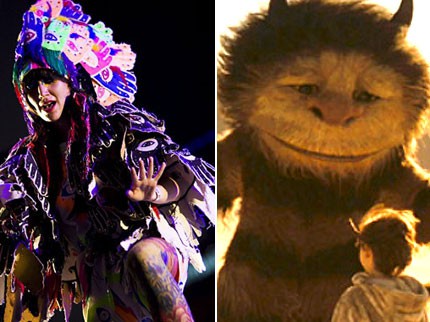 The instantly iconic trailer for Spike Jonze’s adaptation of Where the Wild Things Are used Arcade Fire’s “Wake Up” pretty much perfectly: The rising choruses and childlike background vocals sounded the way the movie looked, with Max in his wolf suit, cavorting with giant imaginary Maurice Sendak monster-puppets.

“All Is Love,” the just-released first single from the soundtrack (and not to be confused with Swedes Love Is All), credited to Karen O and the Kids, goes for a similar vibe, with acoustic strumming and spirited count-offs, only using actual children to provide that nifty children’s-choir effect.

Karen O worked on the soundtrack to her ex’s long-gestating project over the past few years, roping in her Yeah Yeah Yeahs bandmates Brian Chase and Nick Zinner and Deerhunter’s Bradford Cox, among many others.

We may or may not have caught a screening of the film last week and couldn’t really say anything about said screening one way or another, but we can say that “All Is Love” will play over Wild Things’ end credits, and that the film’s music is 100 percent Karen O (a la Cat Stevens and Harold and Maude or Simon and Garfunkel and The Graduate), and that it doesn’t sound like It’s Blitz. And that the film’s release date (October 16) can’t come soon enough.

For those who can’t wait until the theatrical release to hear how things turned out, the Where the Wild Things Are soundtrack is out September 29, and “All Is Love” can be purchased starting tomorrow via iTunes.