Nick Thorburn -- and his cape -- are back, and raised the curtain on next month's Vapours. Click here for a review! 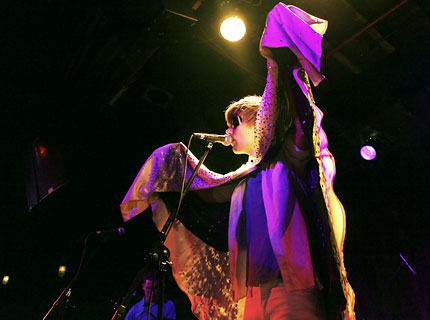 At most gigs, “We’re going to play a new song” is code for “If you need a bathroom break, now’s the time!”But when the new songs are as excellent — and as plentiful — as they were at Islands’ tour opener Wednesday night at Brooklyn’s Bell House, the call of nature must wait.

Vapours doesn’t hit stores for another month, but for all practical purposes last night was the album’s coming-out party.”This is our first time playing all these songs,” frontman Nick Thorburn said early on.”Apologies if I’ve got the jitters.” But, clad in a rhinestone cape worthy of the King himself, he pulled it off, with the strong new material keeping request shouters at bay.

Crowd-pleasing highlights included the tribal drumming of “Switched On” and the scattered clap beat of “Shining,” which pinches the bass hook from “Under Pressure” far more effectively than Vanilla Ice ever did.

The band is down to a four-piece, with Thorburn’s old collaborator Jamie Thompson back in the fold alongside newcomers Evan and Geordie Gordon, but they ran through the twelve tracks like they’d been playing them for years.

While Islands maintained the anthemic leanings of last year’s Arm’s Way, albeit with an amped up synth-pop quotient, they now veer into more emotionally buoyant territory, and do so in much more concise statements. The seductive “Heartbeat,” at just over three minutes long, promises to be the sing-along jam of the fall (though unlike the album version, the band’s live rendition was AutoTune-free) while the goth-bop shimmer of “Devout” flies like an Iron Butterfly but stings like a B-52.

“Turn it on, a rousing song for sympathetic ears,” Thorburn sang in “On Foreigner.”And it’s easy to be sympathetic to jams that are catchy enough to turn into sing-alongs by their second chorus, even on a first listen.Gone are the ten-minute epics of the band’s first two albums.These quirky pop nuggets boil the band’s sound down to a dance-happy core, dispensing with the grand melodrama.

Even with the sterling debuts, the few old tunes also excited the band and the crowd.Fans gleefully rapped — yes, rapped — along with special guest Despot on Return to the Sea’s “Where There’s a Will There’s a Whalebone.” And, during an effortlessly solid encore performance of “Swans,” a relieved smirk finally crept upon Thorburn’s face. “Now,” he seemed to be saying, “it’s cool to take that pee break.”

Islands set list:
“Switched On”
“No You Don’t”
“Disarming the Car Bomb”
“Devout”
“Tender Torture”
“EOL”
“Where There’s a Will There’s a Whalebone”
“Vapours”
“Heartbeat”
“Shining”
“Creeper”
“Don’t Call Me Whitney, Bobby”
“On Foreigner”
“The Drums”
“Everything Is Under Control”

Ray Padgett
Tags: islands, We Were There