The smart alec Seattle punks call it a career with a three-hour hometown show. 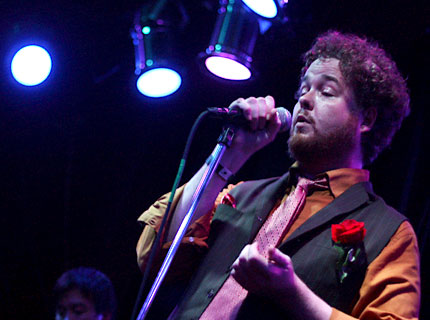 Favorites of indie-rock bookworms everywhere, Harvey Danger went out where they came in, wrapping up their career with a three-hour, 29-song “final finale” Saturday night at the Crocodile Cafe in the group’s hometown of Seattle. In the words of frontman Sean Nelson, the show was a “funmotional” end to the band’s 17-year run.

The Croc was, “The first place we felt like we were a real band,” the chatty Nelson said from stage. Of course, the club isn’t quite the same as it was in its heyday; it’s been spruced up over the years (“If you remember, it was pretty crappy,” admitted the singer.) Fittingly, Harvey Danger, best known for their irrepressible 1998 pop hit “Flagpole Sitta,” has changed too, re-emerging five years ago after a hiatus from 2001-2003 with new members Rob Knop on keyboards and Michael Welke on drums joining original Harveys Nelson, guitarist Jeff J. Linn and bassist Aaron Huffman. (The band’s first drummer, Evan Sult, appeared here as half of opening act Sleepy Kitty).

Despite the lineup shuffling, it was all good vibes on this night, both for the friend-filled crowd and for the Harveys themselves. “You’ve all just seen us hug for the first time ever,” Nelson said after the band capped its performance with the appropriately titled “The Show Must Not Go On.”

Three hours earlier though, Harvey Danger had begun, somewhat haltingly with a stop-start version of the sweeping “Meetings With Remarkable Men (Show Me the Hero),” which name-checks Jesus Christ, the Smiths’ Morrissey and hair-metal puffball Kip Winger. The generous set (sole covers: English Beat’s “Save It for Later” and David Bowie’s “Oh! You Pretty Things”) wowed the crowd, which saved its most enthusiastic cheering for Nelson’s mention of the band’s second album, the commercially disastrous King James Version, and its third, 2005’s Little by Little.

Nelson’s clever, literate lyrics (he referenced Hitchcock’s Vertigo in “Carlotta Valdez,” and Melville’s Moby-Dick in “Old Hat”) were a consistent delight, providing a solid foundation as the band worked its way from its early Nirvana and R.E.M.-influenced songs to the chamber-pop ornamentation of more recent tunes like “Little Round Mirrors” and the jaunty “Happiness Writes White,” which featured French horn. The newer approach was also apparent on the regal-sounding “Wine, Women and Song” and “Moral Centralia.”

The unavoidable “Flagpole Sitta” was saved for the last song of the pre-encore set — and came accompanied by an alternately sarcastic and moving remark from Nelson. “I think we up on stage will take five seconds,” he said, “to appreciate the fact that we never, ever have to play that song again.”

Pike St./Park Slope
Oh! You Pretty Things
Cream and Bastards Rise
(Theme From) Carjack Fever
Sad Sweetheart of the Rodeo
Terminal Annex
Picture, Picture
Underground
Happiness Writes White
Save It for Later
Radio Silence
Cold Snap
Problems and Bigger Ones
Defrocked
The Same As Being in Love
The Show Must Not Go On

Mike Toombs
Tags: harvey danger, We Were There