Plus: Get an update on Them Crooked Vultures, Dave Grohl's supergroup with Josh Homme and John Paul Jones! 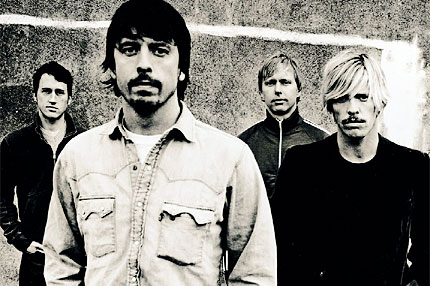 Well, to help refresh your memory, the band will release Foo Fighters Greatest Hits November 3 via Roswell/RCA. It’s their first release since 2007’s Echoes, Silence, Patience and Grace. In addition to classics like “Best of You” and “Everlong,” Greatest will also feature two news songs, “Wheels” and “Word Forward,” which the band — Grohl, Taylor Hawkins (drums/vocals), Nate Mendel (bass) and Chris Shiflett (guitar) — recorded with producer Butch Vig especially for the release.

Grohl and Co. performed “Wheels” for Barack Obama at the White House on the Fourth of July. Watch video of the performance here.

That’s the news from the Foo camp, but meanwhile Them Crooked Vultures are charging forward. The group — which made its live debut in Chicago in early August — is rolling across Europe, showing up announced in Amsterdam and at Belgium’s Pukkelpop Festival (WATCH VIDEO!). Wednesday night, August 26, the band made their live debut in London, opening for the Arctic Monkeys, whose new album Homme produced. Though unconfirmed, rumors claim Them Crooked Vultures will perform at this weekend’s Reading Festival.

No word yet on a when Them Crooked Vultures will release their debut album or head stateside for a tour, but one thing is for sure: It’s going to be heavy!