The Brooklyn-based songsmith uncorks a stellar take on "There Is a Light That Never Goes Out." 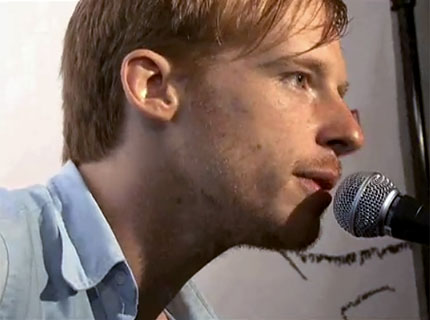 While the Smiths might not ever reunite and satiate millions of fans worldwide, their legacy is still felt rather strongly among artists performing today, and Kevin Devine is certainly among that group.

The Brooklynite, who performed at Lollapalooza with his backing outfit, the Goddamn Band, is no stranger to songs that convey depth of emotion, both lyrically and musically. Just check out cuts like the trippy “Carnival,” off this year’s Brother’s Blood, or the politically charged “Another Bag of Bones” for examples of Devine’s keen sonic craftsmanship and indelible imagery.

After rocking the Chicago audiences at Lollapalooza, Devine stopped by SPIN’s backstage hangout to perform two songs: “I Could Be With Anyone,” off Brother’s Blood (with Goddamn Band guitarist Mike Strandberg accompanying), and a spot-on solo cover of the Smiths’ “There Is a Light That Never Goes Out,” which you can watch below!

For more acoustic covers by bands like Everest and Alberta Cross, and for our countdown of the best covers of all-time, click here!

WATCH: Kevin Devine, “There Is a Light That Never Goes Out” (Smiths cover)