After seven years of silence, the alternative hip-hop iconoclasts are back with the new Fluorescent Black. 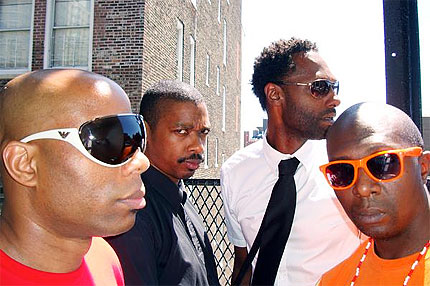 Masters of glitchy beats and dark sonic twists, New York City’s Antipop Consortium introduced a cerebral, electronica-based approach to hip-hop back at the turn of the millennium with highly acclaimed albums like 2000’s Tragic Epilogue and 2002’s Arrhythmia. Then they went away.

And now, after splitting for other musical pastures, MCs Beans, M. Sayyid, High Priest, and producer Earl Blaize are back. Fluorescent Black, due out October 13 on Big Dada, shows the quartet as inventive as ever. Fans of canned club rap beats and self-aggrandizing lyrics are advised to look elsewhere.

In advance of the albums’ release, we’ve got an exclusive track for you. The moody “Born Electric” starts with piano tinkling and some strangely soulful off-key singing from Sayyid before dissolving into a lush, shifting soundscape over which the MC then raps about temptation.

Speaking on the phone from New York City, Beans and Sayyid sounded off about “Born Electric” and why Anti-Pop finally got back together after all these years.

What is “Born Electric?” about
Sayyid: The lyrics were really just about myself and about all of us. It’s about the different changes we’ve gone through in our lives and in music and about hurtling over those challenges individually and collectively.

After so much time apart, was it difficult to get back into the groove of working together?
Beans: When we first started to get together, we had to get reacclimated to being around each other and each other’s personalities. It took a while. But when we started to get into the groove of making the album, it felt we hadn’t left.
Sayyid: There’s an unspoken language we have from all knowing each other and from us all being forward thinking cats.

Is there anything on the new album that you guys were surprised you came up with?
Sayyid: We used vocals in a lot of different ways — stuff with harmonies and singing. But speaking personally, I was inspired by the guys. That excitement was reflected throughout the album. The joints are really strong. Turn the speakers up, man.

Finally, why did it take this long to get back together?
Beans: We always kept in touch with each other. It was just a matter of timing. We were never all in the same place at the same time. But then at my birthday party in 2007, we were all there and were like, ‘Let’s do this.’