The piano man joins the grunge stalwarts on a tribute to their late lead singer Layne Staley. 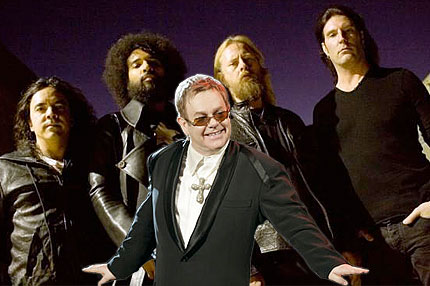 Elton John’s list of unexpected collaborations just got a lot stranger. In recent years he’s recorded a Christmas tune with the Killers and teamed with gay-bashing rapper Eminem — and now the piano man has joined forces with Seattle grunge rockers Alice in Chains!

The unlikely pairing comes on the title track for Alice’s upcoming album Black Gives Way to Blue, which pays homage to the band’s late singer Layne Staley who died in 2002 from a drug overdose. The song’s emotional message moved the piano man to join the effort.

“We were thinking about adding piano to the track and a friend suggested we call Elton,” guitarist/vocalist Jerry Cantrell said in a statement. “I remember laughing and saying, ‘Yeah, I’ll get right on that.’ But I decided it was worth trying and wrote Elton an email explaining what that song means to us — that it’s a real, raw openhearted song for Layne. We sent him the track and got a call shortly after saying he thought it was beautiful and that he wanted to play on it.We were blown away. Elton John is a huge influence on me as a songwriter and having him on that song is an amazing honor for us.”

The band joined John in Las Vegas earlier this year to record the track. “Walking into a studio and seeing the sheet music for that song on Elton’s piano made it meaningful on so many different levels,” said Cantrell. “The whole experience was pretty magical.”

John was thrilled that band recruited him to record the song: “I’ve long been an admirer of Jerry Cantrell and when he asked me to play on ‘Black Gives Way to Blue,’ I was very flattered and couldn’t resist. It was a great recording session with Alice in Chains for a beautiful song.”