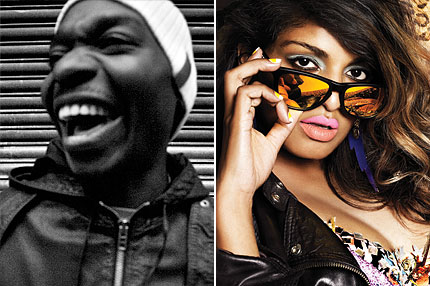 After last year’s “Paper Planes” mania, we were beginning to think that the summer of 2009 would pass without another globe-trotting M.I.A. jam colonizing our ear drums.We shouldn’t have worried.”Rain Dance,” the latest from Afro-combo the Very Best, features the Sri Lankan songbird proving that a throbbing tribal beat and veiled come-ons are all you need to pack the dance floor.

The Very Best are Malawian singer Esau Mwamwaya and British production duo Radioclit.They first got together in 2007 when Radioclit’s Etienne Tron bought a bike from a second-hand furniture store run by Mwamwaya near Tron’s studio.After building buzz with their 2008 mixtape Esau Mwamwaya and Radioclit are the Very Best — which also featured M.I.A. — the trio have returned with their debut album, Warm Heart of Africa, out now digitally.The title track, which features Ezra Koenig of Vampire Weekend, dropped in July, but can’t match the unbridled energy of their M.I.A. collabo.

“Rain Dance” first surfaced in demo form last summer, but the finished product will get you busting out your best shaman stomp to make it rain yourself.Download it over at RCRDLBL.