Playing just 50 miles from their hometown of Dayton, Ohio, the Deal sisters unleash a career-spanning set. 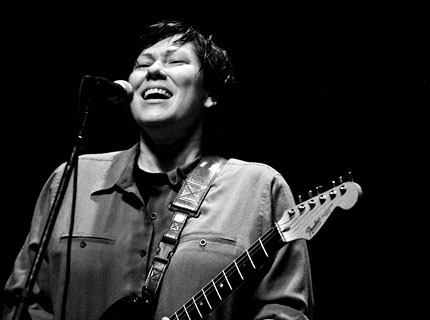 “We’re gonna start strange — and probably get stranger,” said Kim Deal last night at Newport, Kentucky’s Southgate House. And she wasn’t kidding: The Breeders frontwoman promptly proceeded to play only a single snare drum, as she leading the group through “Hoverin’,” a song recorded by both the Breeders and Kim’s mid-’90s band, the Amps.

Kim and twin sister Kelley’s comfort level was high, playing just 50 miles from their hometown of Dayton, Ohio, and a stone’s throw across the Ohio River from Cincinnati. The looseness they flaunted at their last area performance, a pre-election rally for Barack Obama in Cincinnati’s Fountain Square, was replaced by a musical tightness, as the band launched their full-scale U.S. tour behind recently released EP, Fate to Fatal.

After “Hoverin’,” the unpretentiously charming Deals and their co-conspirators — Jose Medeles on drums, Mando Lopez on bass and dreadlocked guitarist Cheryl Lindsey — wove through much of the Breeders’ discography. Inspired versions of early EP favorites like “Do You Love Me Now?” and “Safari” stood out alongside breakthrough singles “Cannonball” and “Divine Hammer,” and more recent cuts like the dirge “We’re Gonna Rise” (off last year’s Mountain Battles), which benefited from some searing guitar work by the usually hit-or-miss Kelley, and the excellent, return-to-form new EP cut, “Fate to Fatal.”

As always, the Breeders’ performance glowed with unassuming charisma, thanks largely to the Deals’ beaming Cheshire smiles and clever, impeccable harmonies, a testament to their enduring sibling chemistry.

Many of the highlights came from less well-known songs, such as the soaring, vibrant “Iris” (from the 1990 debut, Pod), the underrated grunge/surf instrumental “Flipside,” with its shades of Guided by Voices and the Go-Go’s, and “I Am Decided,” a song written by Guided by Voices head honcho Bob Pollard and recorded by the Amps.

The show reached Kim’s early-set “stranger” assessment during the encore, as the band members played musical chairs for the droning, trippy “The She” from 2002’s Title TK. Kim proved Phil Collins-worthy behind the drums, still singing flawlessly on the Krautrock-tinged tune, as Kelley shifted to snare drum and Medeles played funeral-march synth.

The group left the packed venue swaying with the country bop of “Drivin’ on 9,” which featured Kelley (somewhat surprisingly) playing sturdy fiddle parts. A cover of a song by obscure Ohio band Ed’s Redeeming Qualities, the Last Splash track served as a fitting finale.

The Breeders have long belonged to the world, but they’ll never forget where they came from. Long live the modest and humble rock star!

Mike Breen
Tags: We Were There