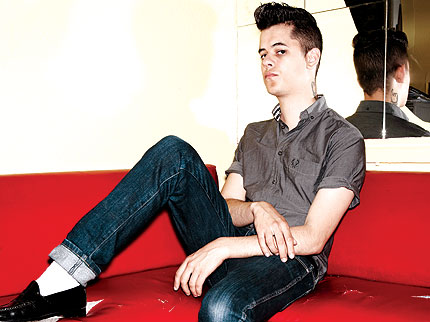 For British electro-popster Ben Esser, nascent stardom — releasing one of the year’s most exciting debuts, packing 8,000 people into his recent Glastonbury gig — is a mere stepping stone. “The only reason I got into music is to become a model — and then an actor,” he deadpans over lobster salad and a bottle of Malbec at a Mexican restaurant in Manhattan. “My true passion is daytime soaps. Say your lines, finish by five, go to the pub.”

He’s kidding. Probably. But with his babyface gangster good looks, his skyscraper coif, and his soft, deep register, he could easily play the misunderstood outcast. Zoolander dreams aren’t a stretch either — muse-hunting fashion designer Hedi Slimane recently photographed the 24-year-old singer, whose style is inspired by the Mods. “They were working class,” he says reverently. “The way they dressed stood for something.”

Hailing from Chelmsford, Essex (“a small, typically English town so separate from anything that really happens”), Esser cobbled together demos in his bedroom. Those became the basis for Braveface (Chocolate Industries), a hook-laden collection of songs informed by the Specials, early Blur, Joe Meek — the British Phil Spector — and, in the case of the bloopy single “Headlock,” Beck. (“It’s basically the same as ‘Loser,’ ” Esser says, “but with different words.”)

Making music at home comes naturally to Esser, who learned to play drums by jamming with his uncles and his dad, a music teacher. “They’d play all these African rhythms,” he recalls. The ska influence came later from a DJ pal named Skinhead John: “We’d go to his house and he’d play records and drink tea with speed in it. He doesn’t have any teeth.”

On Braveface, Esser conjures suburban ennui (“Bury me inside like a knackered stallion” in “Headlock”) and heartbreak (“Love can be draining like internal bleeding” in “I Love You”). But it’s only melodrama. “I’m fascinated with creating characters where real life can be exaggerated.” General Hospital awaits.