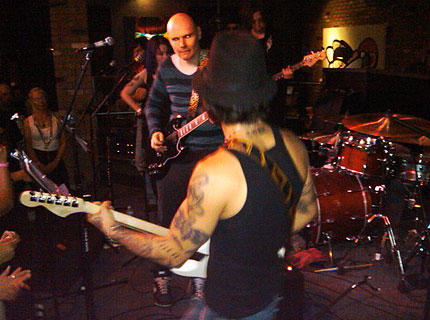 There’s very little information available about the new songs Corgan played last night, save for a few bad cellphone videos and a diligent live-blog account over at Pumpkins fansite Hipsters Unite. The band played 17 songs, with the only familiar jams being “Song for a Son,” which the Pumpkins played on tour last year, and a cover of the Velvet Underground’s “Femme Fatale.”

Perhaps the best take away from last night is a segment that aired on Fresno’s local ABC affiliate, Action News 30, where reporter Amanda Perez checks out the show, talks to fans in line, and interviews Corgan himself — primarily about antique shopping in the small Fresno suburb. It’s a must-watch — scroll down to view.

SPIN.com will be reviewing tomorrow night’s Spirit of the Sky show in Long Beach, California. Check back Saturday for a full review.